Getting there but really slowly – by leesan

Getting there but really slowly – by leesan

Our neighbouring countries are well on their way to a full recovery when it comes to tourism. What about Malaysia?

EARLY in the morning on Aug 23, I was standing on the peak of Japan’s 3,776m-high Mount Fuji. The temperature was -5°C, but I felt warm because I was just so happy, and proud too.

And just as I yelled at the top of my voice, “My travel buddies, thank you!”, the Goraiko (the day’s first ray of sunshine) pierced through the clouds, as if to tell me that it had heard me.

Right then, I had a feeling that the days, weeks and months ahead of us would be a lot better, especially if we continue to work hard together.

Scaling Mount Fuji is by no means an easy feat physically, but we still managed to do it. With strong determination and resolve, we can overcome all barriers before us, and accomplish whatever missions we have. I believe that no matter how hostile our environment gets, as long as we persist and are determined to get through it, all the bad things will simply be a memory one day.

The tourism industry that has been badly affected by the pandemic appears to be recovering, or at least, steadily moving in the right direction. Thankfully, we will no longer be in the “zero-income community”, like how we were during those miserable 25 months.

However, we still lack those favourable factors that will give us a good boost, and it seems that the industry is still confronted by a fair share of obstacles, especially in the absence of capable leaders who will take the country forward.

Isn’t it more pressing for us to pick a capable candidate rather than a party of our choice to lead the country now?

If you have travelled abroad recently, you might have noticed that the Aerotrain service at the KL International Airport is still “under maintenance”. In fact, it seems like it is perpetually under maintenance!

The authorities now tell us that they are actually upgrading the facility, but it would take about three years to complete.

Additionally, you might have also noticed that inbound tourists are advised that they will need to line up for at least 60 minutes at the immigration counters, only to discover that the entire procedure actually takes a full 90 minutes! This means that frustration sets in even before our foreign guests step out of the airport terminal. You can imagine what kind of first impression this country is giving them.

Where is the root of all the problems? Why is no one reviewing the whole process and making improvements?

I have written before about the standard operating procedures at Japan’s Narita Airport. From the moment you step out of the aircraft, it only takes about 20 minutes before you can pick up your luggage, and be ready to leave the airport (unless you spend time shopping at the airport, of course).

This is because while you are still in the queue, the Japanese immigration officers will start to scan your face and take your fingerprint with a portable device, so that you only need to have the data verified at the counter to complete the immigration clearance procedures. It’s fast and efficient! 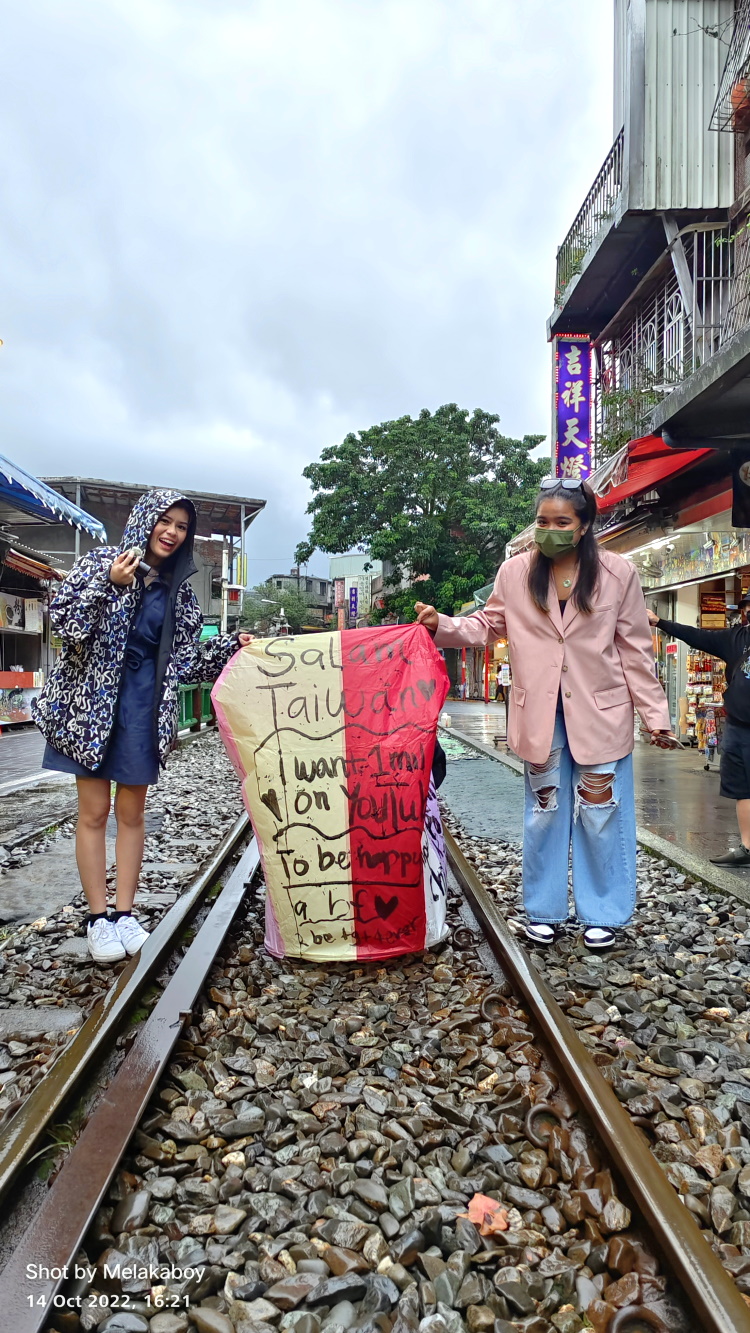 “I’d never have thought that Taiwan was such a Muslim-friendly place.” Cupcake Aisyah(on the left) and Nana, hand in hand with the Taiwan Tourism Bureau presents the hospitality and beauty of Taiwan to Muslims all over the world.

I am also particularly impressed by the overall operation at Thailand’s Suvarnabhumi International Airport in Bangkok, which can be summarised in three words: Dedicated, proactive and thoughtful. Currently, in the first wave of a globalised revenge travel season, Thailand has already restored at least 70% of its pre- pandemic flights while new flights are being added to the roster each day.

As of Oct 30, the number of tourists to the Land of Smiles is a whopping 7.56 million arrivals, on course to achieve its 10 million target before the year ends.

You might think such a massive influx would invariably paralyse the country’s international airports. Let me tell you, the opposite is true! Immigration clearance is running very smoothly because dozens of counters have opened up at the airport, and they are all clearly marked for different categories of arriving passengers. Whenever a large crowd piles up at some of the counters, the other less busy counters will come to their rescue, so that you can retrieve your checked baggage in around 30 minutes and be ready to head downtown to start your shopping, hunt for food or visit the Erawan shrine.

I have to stress that this is not so much about the quality of the operating system employed, but rather the ground staff’s work attitude and thoughtfulness. Looking around this region, we cannot deny that the Thais are among the top performers in the service industry, a reputation we used to also claim some time ago. It is therefore understandable that Thailand has successfully captured the hearts of the world with its exceptional and irresistible “soft culture”.

Without a doubt, Thailand is set to become the biggest winner in post-pandemic global tourism once again. Such a strong rebound could be attributed to the unrelenting efforts of the Thai government and its tourism authority. They launched the “Sandbox” travel packages at the height of the pandemic, followed by a “SMILE” strategy to ensure a sustainable development of the tourist industry. This then boosted the country’s foreign exchange earnings while creating more job opportunities for its people, who will in turn enrich the national coffers with the income taxes they are going to pay.

Singapore’s travel operators are also very lucky, as the city-state’s government continued to take good care of them during the pandemic, providing paid training for travel operators. It is now proven that the moment the country reopens its doors to foreign visitors, these people are fully prepared to start delivering top-notch quality service.

As a matter of fact, tourism promotion bodies worldwide never stopped discharging their duties during the pandemic. They worked even harder to promote their respective countries, generously hosting journalists to have first-hand experiences of their attractions and cultures. 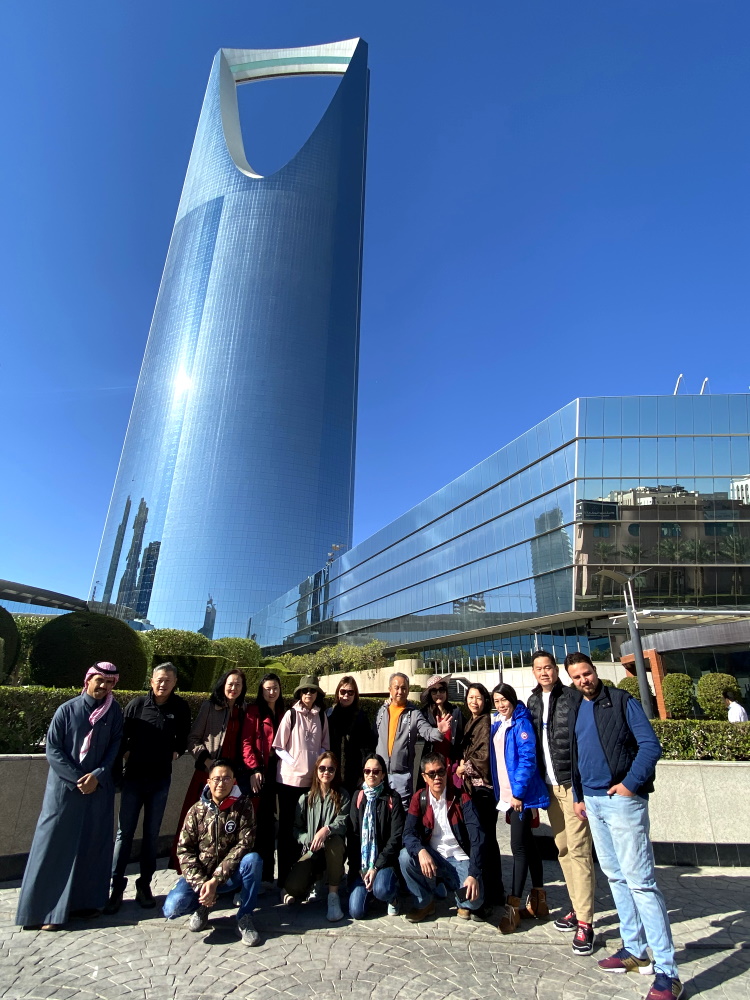 The Saudi Tourism Authority is fully engaged and motivated to promote and boost the kingdom’s tourism and culture sectors. 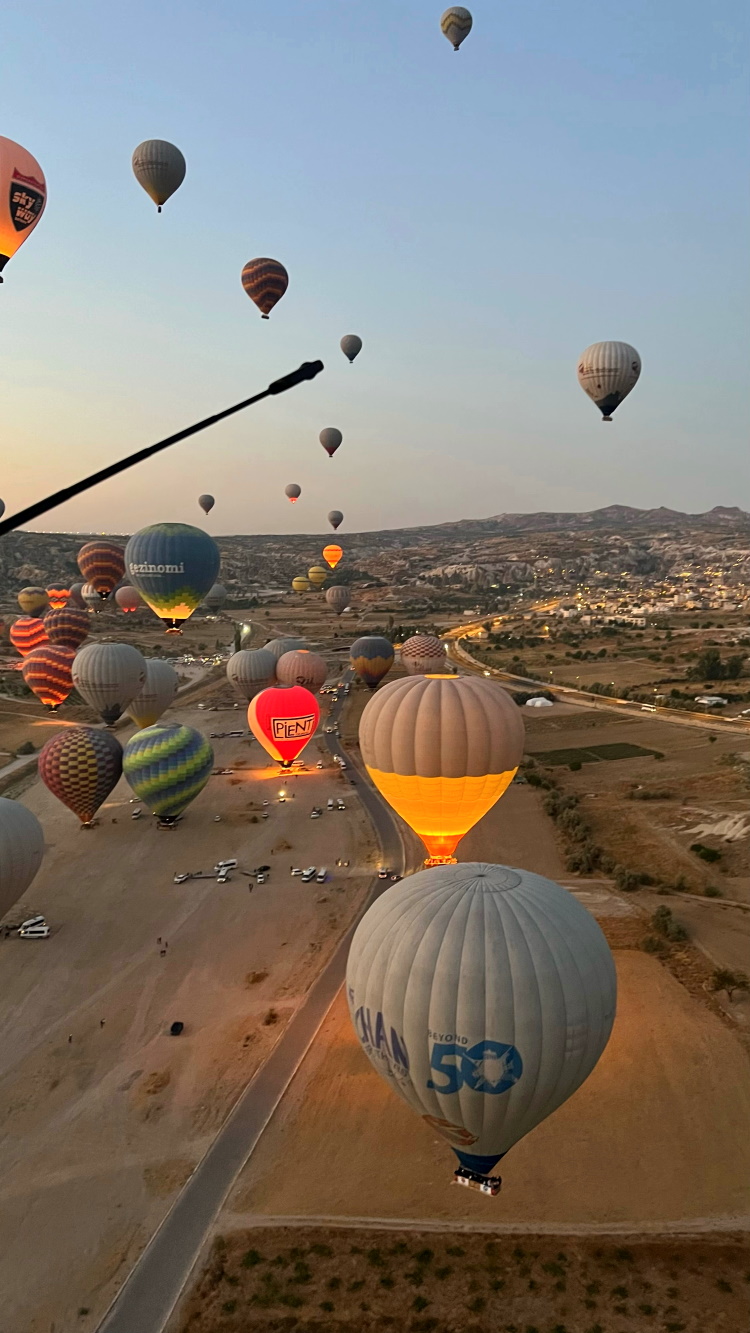 The big winner in tourism recovery in Europe is Turkiye as more and more tourists are making their way to the beautiful country each month. – Photos: Apple Vacations.

Among the most outstanding performers in this respect are Taiwan Visitors Association, Korea Tourism Organisation, Go Turkiye, Japan National Tourism Organisation, Tourism Australia, Hong Kong Tourism Bureau, Macao Government Tourism Office and Switzerland Tourism. Even the Saudi Tourism Authority refused to be left behind in promoting the kingdom’s many wonders.

Thailand, Singapore, Turkiye and Switzerland were among the early star performers. Unfortunately, the leaders of certain countries are still daydreaming today. Or are they busy fighting among themselves for more power?
To be honest, while we can accept the reality that we had to go without any income for 25 months, we can’t accept such sloppiness on the part of the country’s decision-makers. All we need now is a clear direction from the powers that be.

The reality is that we have not heard any of our government people speaking up for the travel industry. No, not even one spirit-lifting slogan, let alone a clear direction to help us navigate our way.

The tourism industry should be a key industry of national importance. That’s why we have a ministry especially for this sector, along with cabinet members, secretary-general, directors, chairmans, and so on.

That said, we still have a very long way to go before full recovery, not to mention those predictable and unpredictable setbacks, but who will come to our rescue?

Leesan, the founder of Apple Vacations, has travelled to 134 countries, six continents and enjoys sharing his travel stories and insights. He has also authored five books. 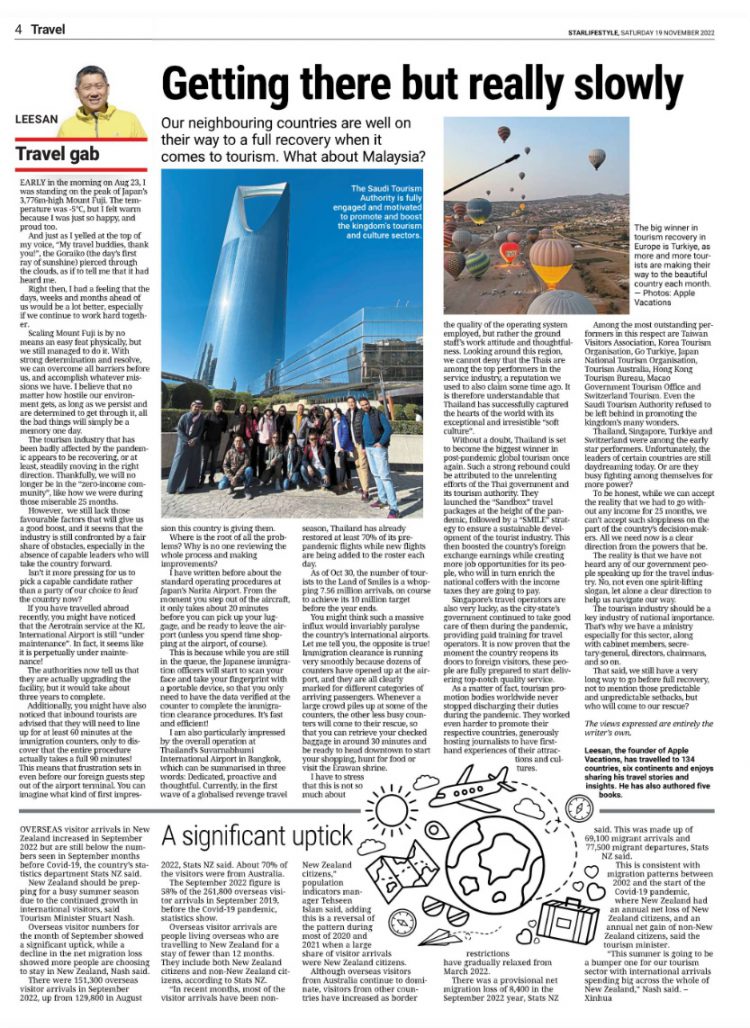 影片：2017年 • 大马首家万怡酒店（Video: The First Courtyard by Marriott Melaka in Malaysia, by 2017）