“Life is Travel, Travel is Life” – this is a catchy phrase that makes everyone expect encounters in a journey to be eventful and they end up looking forward to unexpected surprises! 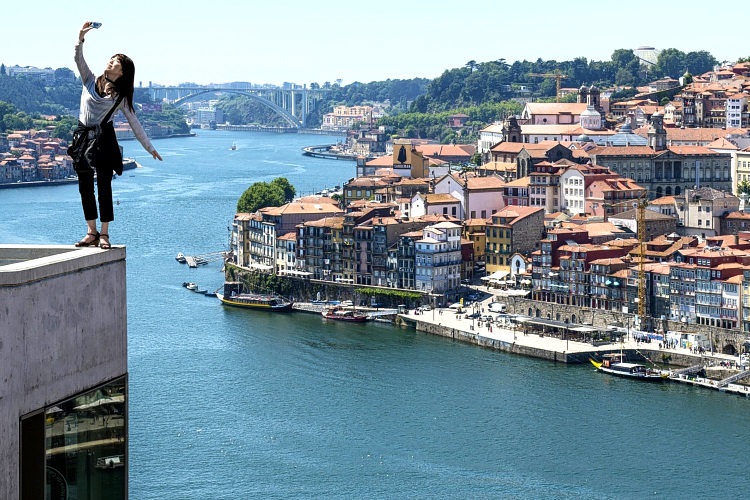 Personal safety should be responsibility of every traveller and not dumped on tour operators.

When it comes to travel, personal safety is your own responsibility

Recently I witnessed a robbery in front of a famous shopping centre in the Bukit Bintang area in Kuala Lumpur. A motorcyclist snatched the handbag of a female tourist – it was done so swifty.

The poor lady was in shock. She lost not only her money but her passport, too, and she was supposed to return to her home country the next day. Fortunately, she was not injured.

Once I also helped a Japanese girl who was attacked from the back near the Petronas Twin Towers. She had bruise on her face and a fracture, and thus needed hospitalisation.

Such kind of tourist thefts are not peculiar to Malaysia; in Europe, tour guides often remind tourists to keep their bags within sight at all times, and yet inevitable thefts still happen.

Many of the tourist attractions in Europe are targeted by gypsies who operate in gangs, and they are fast and accurate.

In a sharing session “The Art of Travel” that I conducted at Kuen Cheng High School in KL, someone from the audience asked what to do if you lost your passport during your travels.

This is simple and yet few travellers know what to do. I would recommend that you keep a photo of your passport and visa in your smart phone besides keeping a printed copy of them, just in case. Secondly keep a record of the contacts of the embassy of your home country at the place you are visiting. Should you lose your travel documents, get in touch with them.

Make sure to tell the consular office if you’ve been the victim of a crime, as well as when your departure date from the country is. A police report is not always necessary.

Of greater importance I feel, is what one should do in case of injury. Nowadays, there are many tourists who are injured while taking pictures.

“Life is Travel, Travel is Life” – this is a catchy phrase that makes everyone expect encounters in a journey to be eventful and they end up looking forward to unexpected surprises!

However, “natural disasters and man-made disasters” which maybe encountered during one’s journey are most often neglected.

Perhaps to most travellers, there are unavoidable. When an unfortunate incident occurs, everyone – tourists and government authorities – raise many questions but this is too late.

A recent example occurred when two boats capsized off the coast of Phuket.

On July 5, two tourists boats capsized and sank near Phuket, Thailand, during bad weather. Forty-six people died and three were missing from the double-decker ship Phoenix PC Diving, which carried 101 people, including 89 tourists. The 42 passengers aboard the second boat, Serenita, were thankfully rescued.

After this tragedy, there were many questions raised like “why were there no weather warnings, why weren’t there enough life jackets, why did the travel agents still went out to the sea?”

However, nobody pointed out that the tourists themselves should taken some responsibility.

Many tourists do not realise that you get what you pay for in tour packages. When they are offered unreasonably cheap packages, they ought to be alert and be aware of scams.

Most often, signing up for super cheap packages is the beginning of a man-made disaster.

Tour package scams by irresponsible travel operators are fast becoming a public menace. In most cases, holidaymakers would fall victim to errant travel operators who abscond after collecting a deposit or often the full amount for tour packages.

While some cases involve freelance or unlicensed travel agents, there are also many reports of licensed travel operators failing to fulfil their promises, even after customers have paid in full.

These kind of tours are controlled by a belt-line operation that covers everything from cruises to tour buses, shopping stops, additional travel expenses, tour guides, security(usually poor), and everything tourist-related. This is a hidden crisis.

Awareness of such crisis however is present, and efforts by the Chinese Embassy in Malaysia were praiseworthy.

Recently, the deputy consular chief at the China embassy in Kuala Lumpur, Wu Shenghao travelled to Terengganu to look at the safety measures in place for tourists travelling by boats and ferries to island like Pulau Redang, Pulau Perhentian, Pulau Lang Tengah, Pulau Kapas and Pulau Bidong. It was reported that Wu was acting on the strict instructions of China ambassador to Malaysia Bai Tian.

However, these efforts have to be further intensified to have a preventive effect.

The embassy has issued a gentle warning but if it is not communicated to the right people, things will remain as they were.

In fact, the embassy should also pay attention to the fact that many Chinese tourists are trapped under the sun and rain in long queues at the immigration counters. And rushed on long road trips to shopping stops and additional self-paid attractions. Then, rushed home on the cheapest flights.

In fact, when they return to their homeland they might not even have made any impression of the history, culture and cuisines of the country they had visited.

This kind of itinerary might be too stressful for elderly tourists. It has happened to Malaysian tourists who are not well-informed and have gone abroad on a super cheap tour packages. It has even resulted in loss of life due to too much stress.

Therefore, the sense in travel crisis is maintaining a positive attitude towards prevention rather than cure.

So in order to prevent a crisis in travel, prevention is always better than cure. There is actually a Chinese proverb urging consumers not to be greedy so as not to be scammed.

The next time when you are in an aircraft that doesn’t take off after a long wait, do not blame your tour leader.

You have to know that when the aeroplane cannot take off, it is often caused by technical problems and the pilot has a responsibility towards prevention; he will never risk the lives of the passengers onboard. At the same time, the airline company will not burn fuel for no reason.

On your next travel, when you are reminded to be careful, please take heed.

This advice is not frivolous. We must take responsibility in order to prevent a crisis. 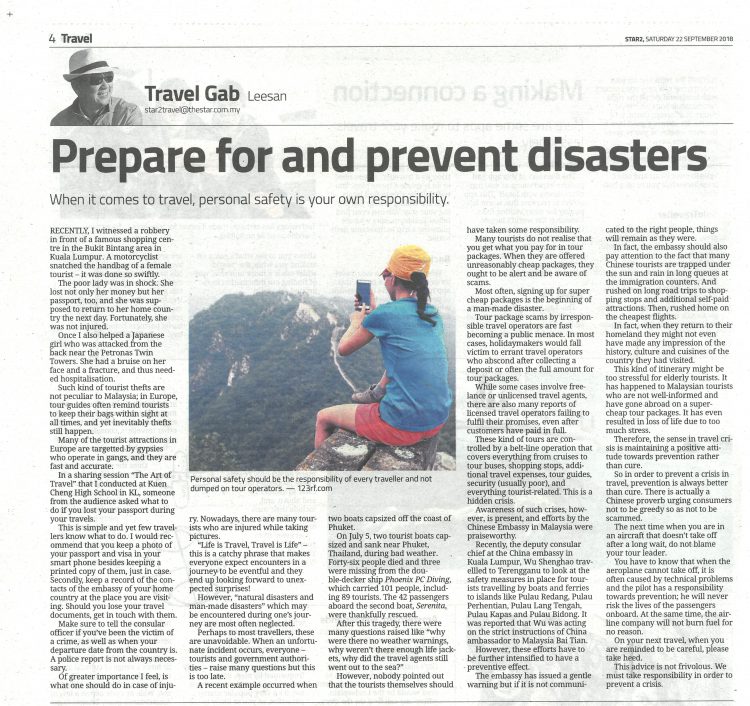 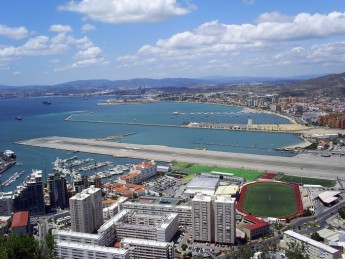