The columnist recalls being stuck at sea in the Southern Atlantic Ocean as surrounding nations close their borders. 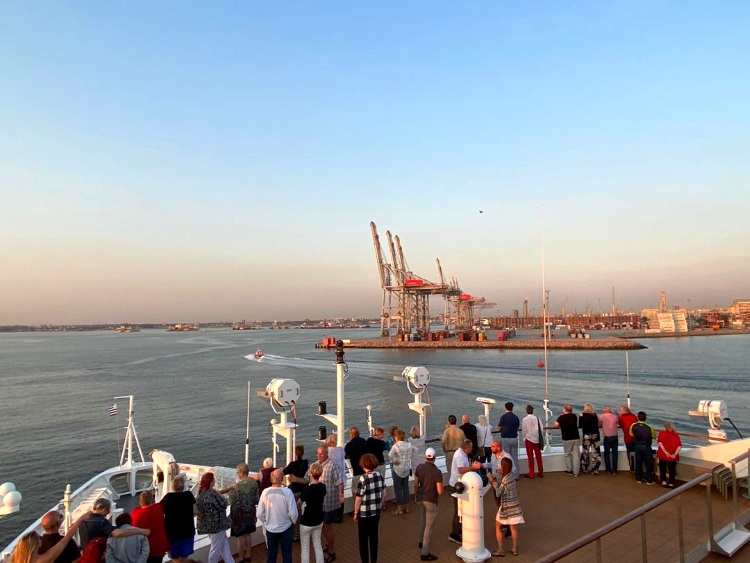 The ship was so close to docking at Montevideo port in Uruguay, but were refused by the authorities.

WE were sailing back to civilization world from the southernmost tip of the world(Antarctica), bringing with us the heartfelt messages of love from the little penguins, when the captain told us that we had to be prepared to face a completely different world.

Things were not the same anymore – the world was no longer what we used to know barely 15 days earlier.

we already had some idea about what was happening around the world thanks to the internet.

This “invisible” virus has messed up our lives and we are now living in a tense world, with so many countries shutting down borders and observing lock downs and movement control orders.

What the captain was actually trying to tell us was that there was a chance we wouldn’t be able to dock. Everyone on board the ship was stunned to hear that.

We had wanted to get home as quickly as possible because we were aware that a disaster was about to strike soon. Plus, we all missed our families back home.

Unfortunately, as we realized about how fast things were escalating around the world, and how some countries where simply getting overwhelmed, we knew what we were in for.

The European passengers on the ship moaned in desperation, saying that the entire European Union(EU) was under lock down and they would not be able to go home anytime soon. Goodness! This left us panic stricken, unsure of what to do.

At first, I pretended that things would not get too bad but deep inside, I was really worried about the Covid-19 outbreak in Malaysia and the well-being of my fellow countrymen. I prayed that under the leadership of our capable Prime Minister Tan Sri Muhyiddin Yassin, the Malaysian government manages to get all political parties to put aside their differences and ork together to stop the spread of the virus for the sake of the rakyat.

But given the extremely challenging environment today, can we really count on the government to deliver us out of the current doldrums?

In South America, the outbreak has made everyone crazy. We wondered if they would see us as virus carriers and whether they would seal off their borders, stopping us from entering.

The Captain said that time was not on our side (and that we may be too late to dock in any of the countries); this made us even more jittery.

I had only been away for 15 days(on the Antarctica expedition). How could this world, one that I thought I knew so well, possibly change so much during that time? People were suddenly becoming indifferent towards each other and some were even morally depraved in this short time span. How could countries just shut their borders without prior warning?

I was sure that luck was still on our side, though. Some Good Samaritan gatekeepers will still leave their country’s borders open for us, for sure! We just had to wait and see.

Soon after though, the government of the newly elected Uruguayan president issued an emergency “shut all doors” decree on March 13 – we were less than 2km away from the Montevideo port, where we had hoped to dock. 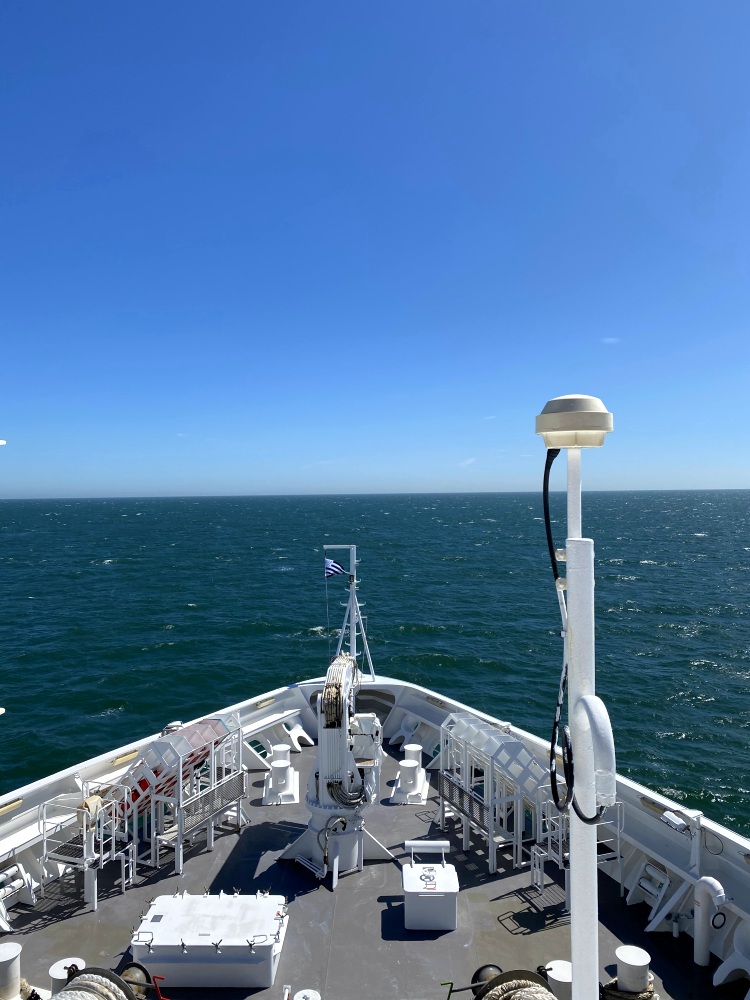 The columnist and other passengers spent their days worrying about loved ones and their respective countries on this ship for more than a month. — Photos: LEESAN 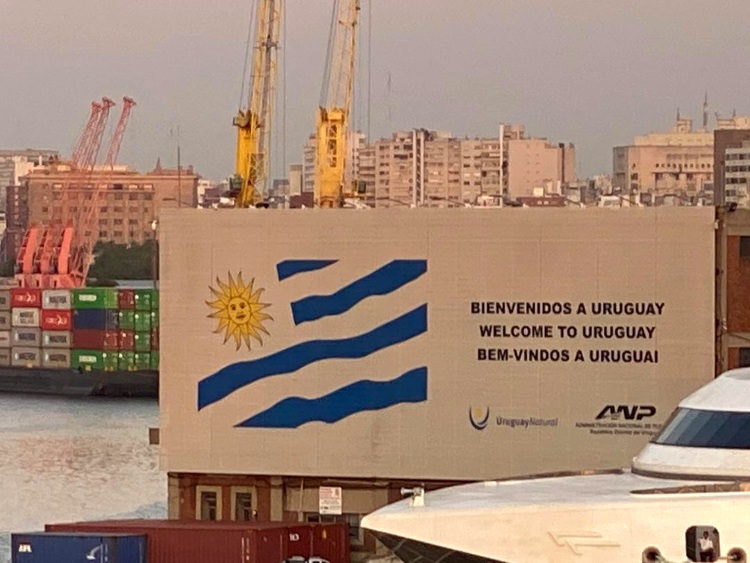 Everyone panicked. We were about to be locked out at the Uruguayan port. My heart “screamed” in agony: why is this world so cruel and merciless, turning your back on us without a word of warning?

(Don’t get me wrong, I support and agree 100% that countries need to do a lockdown to combat the Covid-19 pandemic. At the time, however, I was just devastated.) 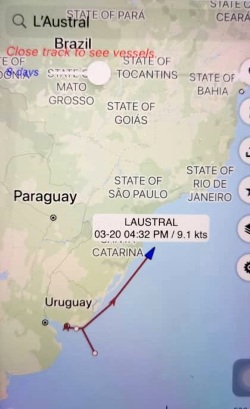 I have always loved movies that were inspired by real-life stories, people or situations. I get a thrill watching all the unexpected twists and plots. But now, as I experience all these horrors in real life, I am terrified. As a drama fan, I know that there will not be a quick fix to this whole crisis.

During this period, countries like Italy, South Korea, Iran and Japan have all been brought to their knees by the virus.

After two days of negotiating with the Uruguayan authorities, we were still not allowed to dock in Montevideo. Fortunately, we found solace in the metaphorical arms of its neighbouring country, Argentina.

On the evening of March 16, our captain ordered an immediate north-easterly change of course, towards Argentina.

Everyone clapped, hugged and cheered on the sun deck; we finally had a chance to go home. But the euphoria lasted no more than half an hour. Suddenly, Argentina announced an emergency lock down too. 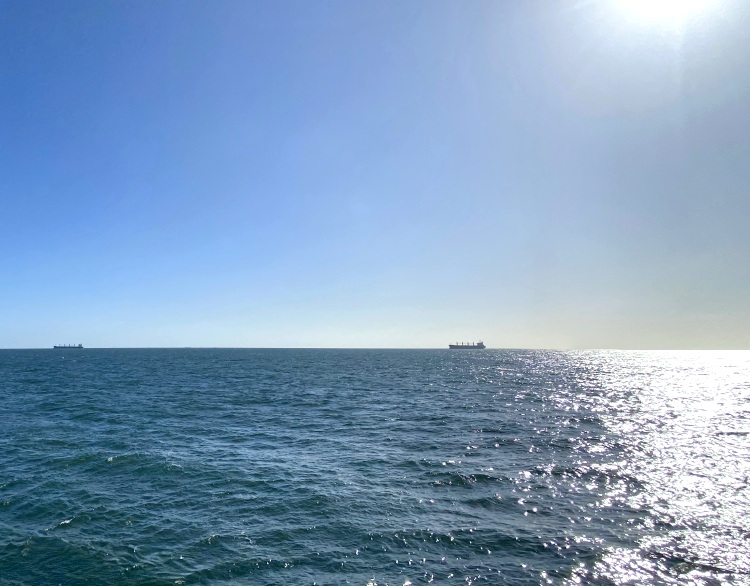 While on their way to Argentina, the captain received news that the country had also announced an emergency lock down.

Many of us had planned to catch the next available flights out of Buenos Aires to our home countries, but what do we do now? Some of the passengers started to cry, feeling worried and scared.

As if that was not enough, Malaysia also declared its own movement control order (MCO) almost at the same time.

I could understand the South American government’s decision, but I thought they could at least be humane enough to offer a lending hand to people in need.

I mean, at least Malaysia offered a 24-hour grace period for people to rush their way in or out of the country. The South American lockdown was instantly effective. There was zero leeway!

Over a hundred nations across the world have already sealed their borders. I have this urge to ask United States President Donald Trump, “why do you still behave like a little kid, and keep blaming all the mess on the ‘Chinese virus’?”.

It is unbecoming that during such trying times the Americans could have so little concern for fellow humans elsewhere in this world.

As a matter of fact, they should take cues from successful Chinese experiences in tackling the virus and step up their international cooperation to fight humanity’s common foe.

And do it fast!

Having said that, the Covid-19 has inadvertently exposed the vast differences between the value systems of the East and West, and the wisdom and abilities of government leaders.

It seems like it is now normal practice for nations to simply shut down their borders without warning to protect their own. But by doing so, they are putting all travellers, labourers and foreign students within their country in a dilemma, as they are denied the right to dock, to fly, and to go home. It has been reported that more than 100 cruise ships and passenger aircraft have been locked out and stranded at different corners of the Earth, unable to ferry hundreds of thousands of passengers to their desired destinations on time.

And I was one of the many desperate “unwanted wanderers” out there. “Hey! I have a story to tell you, but do you have a plane to pick me up, please?”

I also wonder where the United Nations, the global body that supposedly represents 196 sovereign states on this planet is. What are your objectives and roles now?

I do understand that as country after country falls to the scourge of the virus, everyone is forced to close their borders and send tourists/travellers/foreigners home.

But what I worried about the most while on the ship was that my home country Malaysia is not spared from the vicious spell.

I’m sorry for being unable to head home and observe the 14-day MCO (which has now been extended to one month) with my family, colleagues and friends in Malaysia. But deep from my heart I urge everyone, please, duduklah diam-diam di rumah!

There is no denying that each and every one of us is every bit a part of this global pandemic. What we are experiencing today is unprecedented and we probably won’t see the same thing happening again in another thousand years. Hopefully.

More frighteningly, the ensuing economic depression could be catastrophic to everyone. I do hope my fears are just exaggerated. 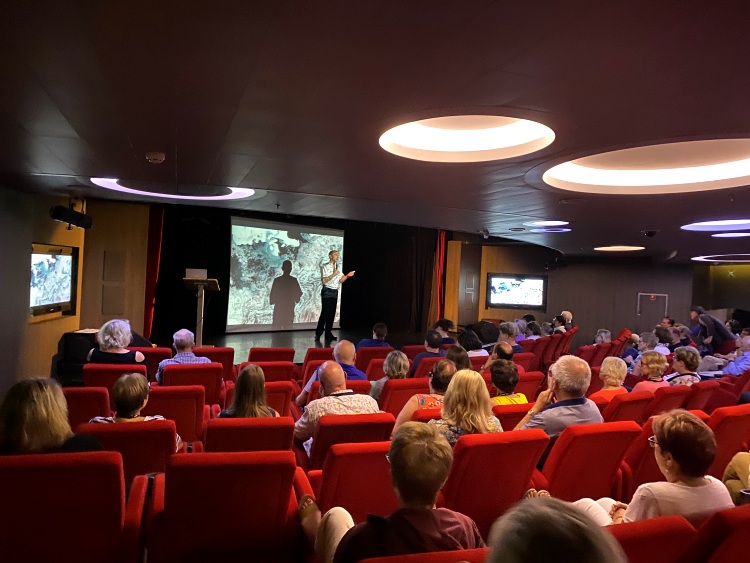 Our captain told us that we have to try our luck further north to Brazil. 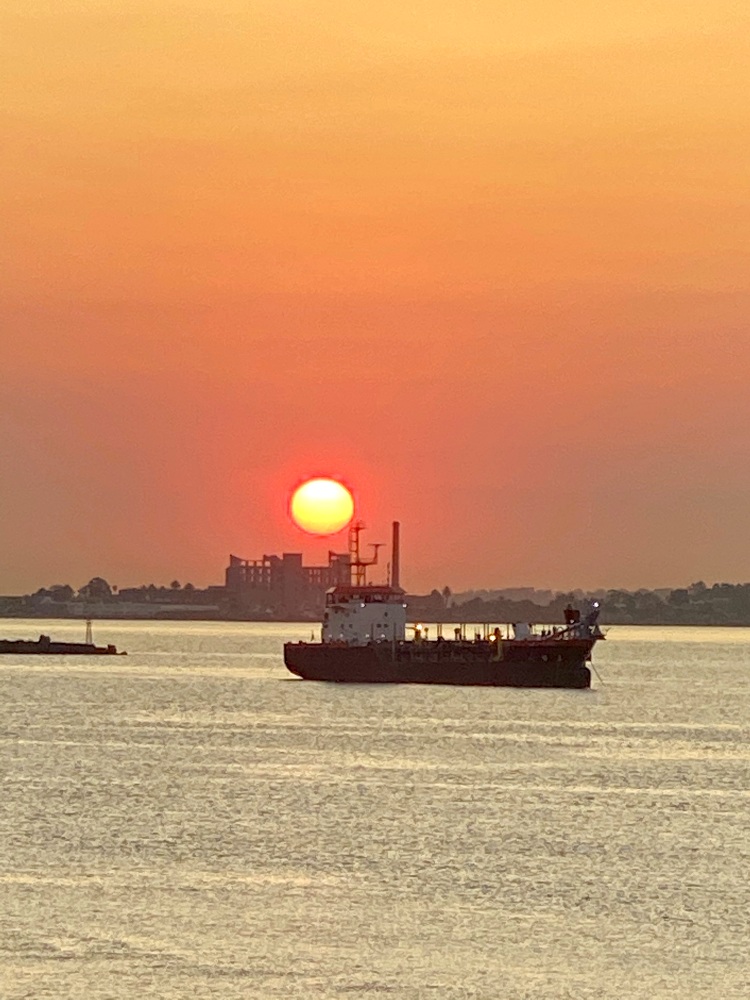 Beautiful sunset during our sailing in southern of South America, positive sign.

Suddenly, our captain told us that luck was finally on our side. The ship with superior operability was cruising steadily and comfortably, and we had enough supply of food and clean water to try our luck further north along the Atlantic coast of South America towards Brazil. We had been preparing ourselves psychologically in case a change of direction was imminent.

And if Rio were to turn us down, then we would steer our way across the North Atlantic towards Cape Verde (Africa) for supplies before making the 11,075km (21 to 30 days of sailing) expedition to France. Bonjour!

Today marks our 24th day on the ship. We have so far sailed 9,100km. If we had taken flights, that would be a total of 28,970km. A majority of the passengers are no longer keen to continue our sail to Europe; everyone just wants to go home.

As all these these thoughts of going home played in my head, I fell asleep, as the ship wobbled gently above the Atlantic. What else was there to do?

* Thanks to the help of the Malaysian embassy in Brazil, as well as Wisma Putra, the writer arrived home safely on March 24. That was the same day Brazil announced a total lock down, and the day Emirates suspended all their flights. 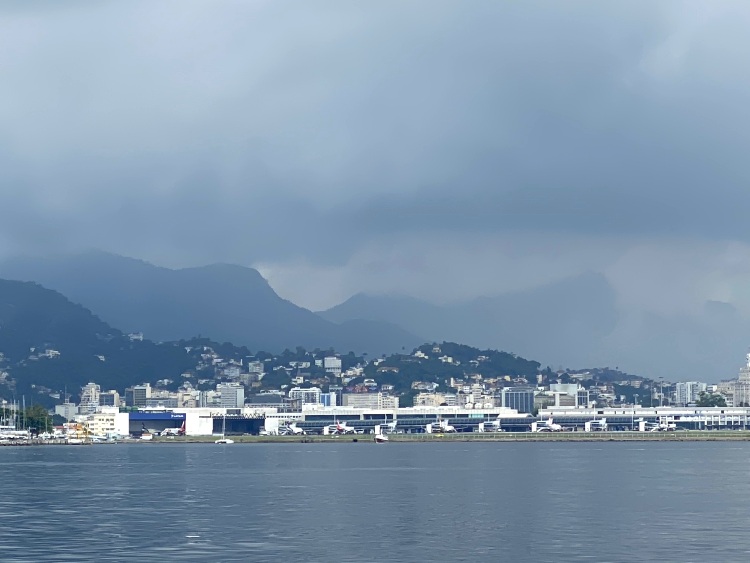 The ship was finally allowed to dock at Rio de Janeiro, Brazil. 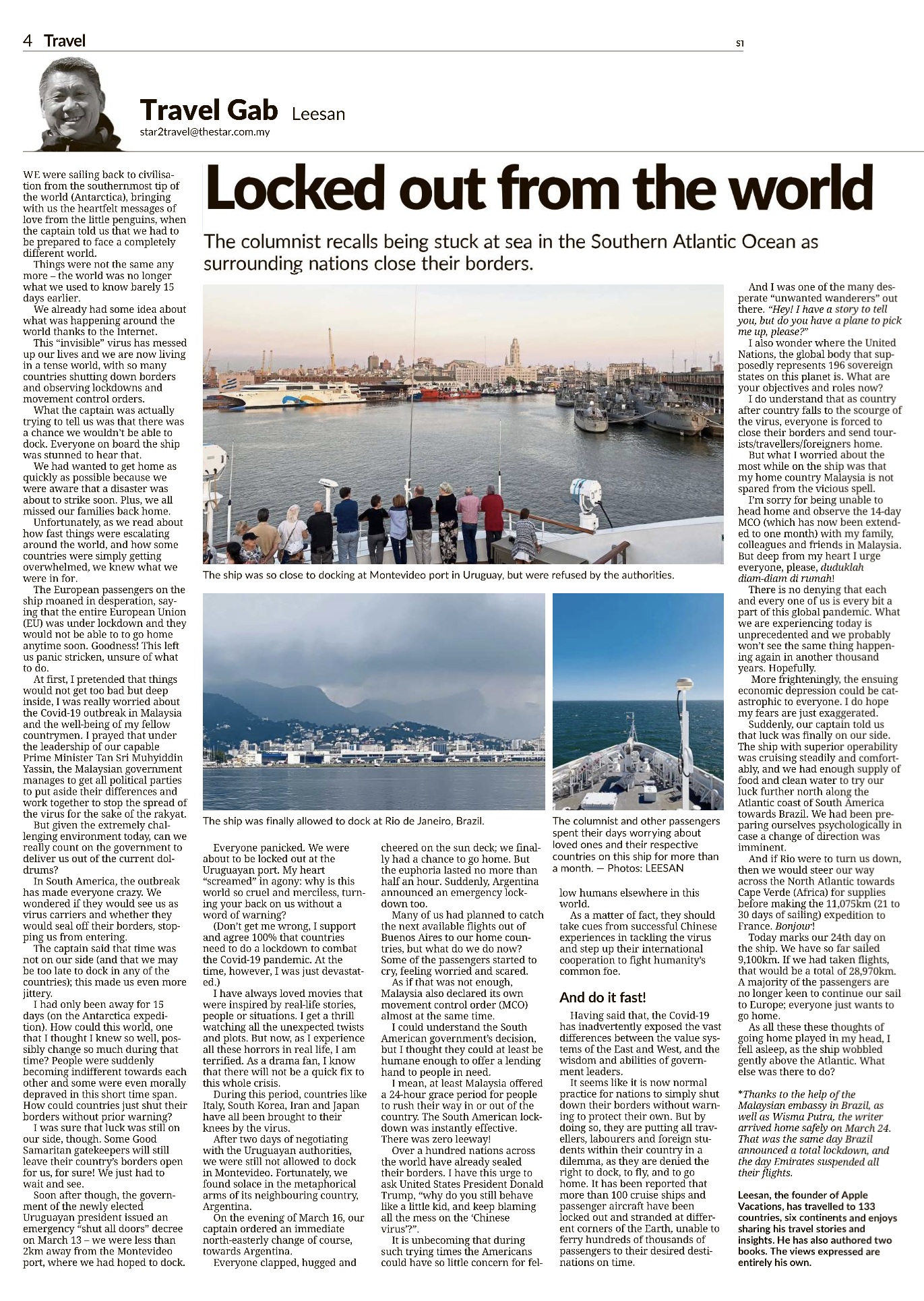 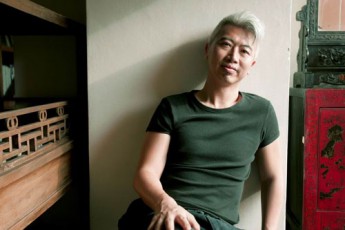