The columnist reminisces taking his first group of foreign guests around Peninsular Malaysia.

IN the first part of my story, I talked about one of my first work assignments as a tour guide in Malaysia, where my “sifu” Ramli and I brought a group of Australians from Singapore all the way to Kelantan.

Part two begins with a journey from Kelantan on Route 4, to Route 1 – Penang. 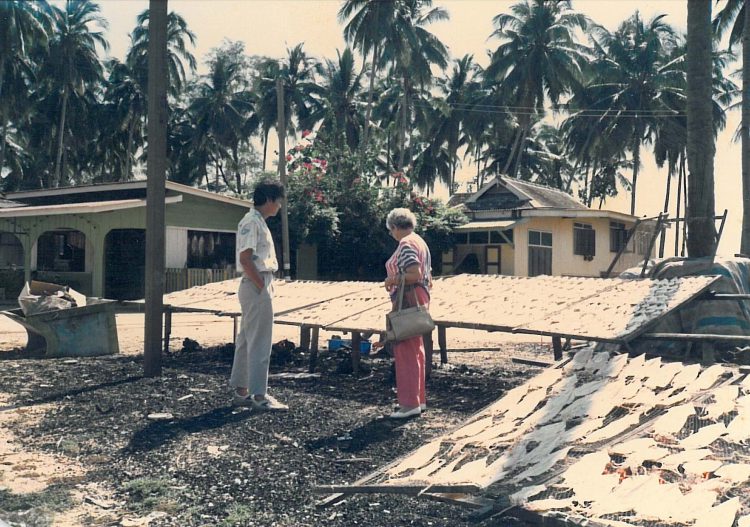 Tour Leading the Mat Sallehs in 1988, I find that foreigners are particularly interested in the multi-ethnic and multi-cultures bred by the colony in Malaysia.

Once we arrived in Penang, we made our way to the jetty and onto the colonial-style double-decker ferry, to cross over to the island. The Australians kept themselves busy during the half-hour ride by snapping pictures. One of them said that she couldn’t wait to see the Queen Victoria Memorial Clock Tower near the Penang port, as well as Fort Cornwallis.

I love the state’s name in Malay, “Pulau Pinang”, as it tells us a little about how the island got its name – from the ubiquitous areca palm trees. Ramli proposed that we go to Balik Pulau first, before stopping at the Snake Temple and then circling the airport area to search for areca palm trees. That was the first time I travelled to this part of Penang, and was very surprised that the place was still largely covered in thick jungles.

We could see plenty of tall palm trees on the hill slopes, but unfortunately they were of little economic value to the local residents who by then had started growing the more lucrative durian trees instead.

After I explained to the tourists about the palm trees, one of them asked: “Is it legal to clear the land to make way for durian plantations?” I replied that they had to ask the original inhabitants of the hills – the very animated monkeys! 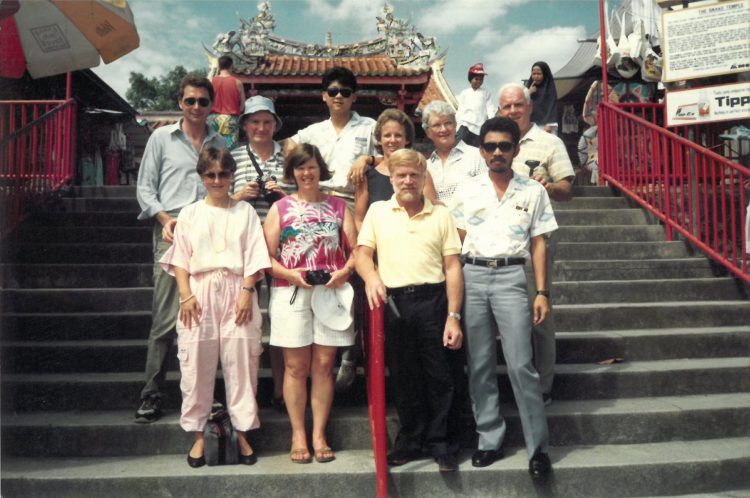 The writer(back row, center) and Ramli(right) with their Australian tour group at the Snake Temple in Penang in 1988. 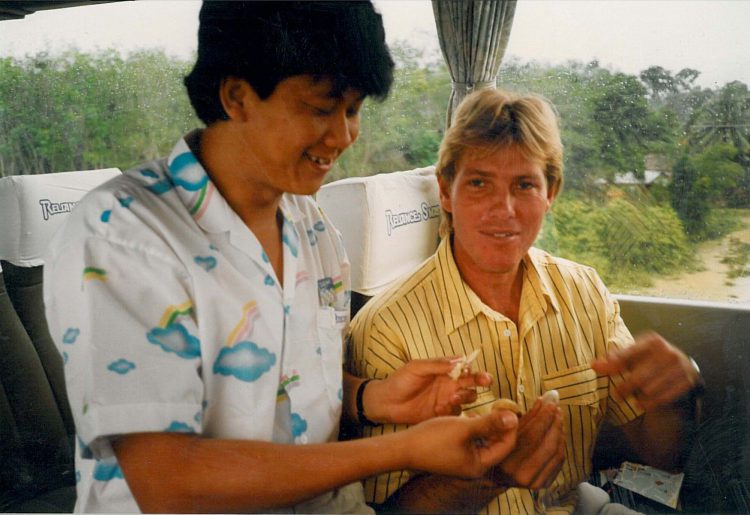 These Mat Sallehs travel were adopting a typical “see as you go” mentality, which was what I felt I needed to learn.

Penang is endowed with rich resources that are perfect for tourism, like verdant hills, pristine beaches and plenty of heart-warming stories of the past. I introduced my guests to the local Chinese clan houses, temples and all the many festivals we celebrate year-round.

We went to the Khoo Kongsi near Chulia Street, and I began telling them the story of when the Chinese immigrants arrived in the mid-19th century, and how they took care of one another. I also explained to them the various Chinese family names and where their respective ancestral homes were back in China.

I actually have no idea just how much the Australians understood me, although some of them did ask a few questions and appeared very keen.

Apart from the colonial buildings, which they loved so much, other things they found interesting included the local Nyonya culture, Penang food and road names! All these are what make the Straits Settlements Island a travel gem.

Upon leaving the island, I asked the tourists which aspect of Penang impressed them the most. They said the many stories of the people of Penang and the things they saw along the way were great, as well as the coconut milk cendol. This was 34 years ago – I wonder if this particular cendol stall is still there today?

While the way that the foreign visitors travel might seem carefree and “aimless” to some people, in reality they have adopted a “see/learn as you go” mentality, something I felt I needed to learn back then. I loved chatting with them in person as I got to discover exactly what they thought of tropical countries.

Soon, we were back on Federal Route 1, the main arterial road known for its breathtaking scenery and colourful social fabric. We made a brief stop at Taiping Lake in Perak before going to the Ipoh railway station to check out its stunning colonial architecture.

Of course, when in Ipoh, we had to go to the Old Town for some fabulous white coffee, before proceeding to Kampar for its famous curry chicken bun. This delicacy is not just a hit with Asian visitors to Malaysia, Westerners love them too.

There were plenty of roadside stalls along the main road selling all kinds of local produce such as petai, pomelo, cempedak and durian, which got the attention of our guests who could … smell them.

Next up was a two-night stay in Cameron Highlands. Back then this place was not as developed (or overdeveloped) as it is today. All the place had were tea gardens, vegetable farms, flower orchards and forests. We stayed at Strawberry Park and went to the Smokehouse for an afternoon of English tea.

We also took a leisurely stroll into the jungle in the evening. A few of them yelled in astonishment at the sight of a withered Rafflesia, the world’s biggest flower.

But there was no need for me to tell them anything about the Rafflesia – instead, they were the ones who told me all that they knew of this unique plant. Looks like they really did their homework before coming to Malaysia!

Once we left Cameron Highlands, we made a brief stop at the quaint town of Kuala Kubu Bharu, and later checked out Batu Caves in Gombak, Selangor, before making our way to Kuala Lumpur. While in the city, we visited the railway station, the Moorish buildings, Chinatown, the museum and the national monument.

Somehow, though, I felt like they were unimpressed by all these.

During this trip, I came to discover that many Caucasian tourists had a strong interest in the multifaceted cultures of former Western colonies. At Melaka’s Jonker Walk, the visitors kept saying, “Incredible!” throughout our walkabout, snapping pictures with their cameras.

It’s not hard to see why, too, as you could see the houses of worship of different religious faiths either standing side by side or just within metres of one another. Having travelled to 132 countries and territories across the world, I can confidently say that this is something unique to Melaka – you cannot find it anywhere else.

I always tell people that Malaysia’s biggest legacy is our diverse community and culture. Unfortunately, today I fear that this beautiful cultural diversity may be compromised.

I think we all miss the days when racial harmony and solidarity were our national landmarks. An era when Soh Chin Ann, Santokh Singh and Harun Jusoh became symbols of a united Malaysia back in the 1980s.

Our guests had a fruitful and enjoyable trip in Malaysia, or at least in the peninsular. After having spent several days with foreign tourists for the first time in my life, the trip prompted me to rethink the “global village” move, and made me question so many things.

The writer introducing some of his guests to durians, who were adventurous enough to try them. – Photos:LEESAN 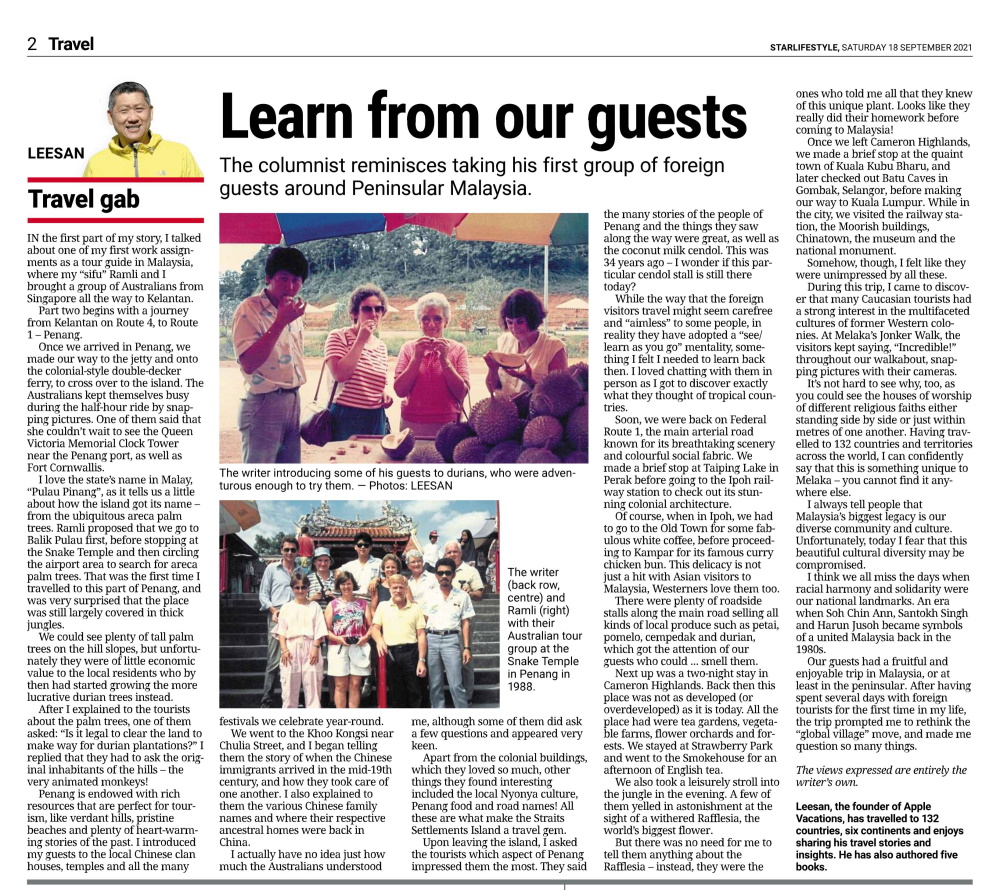