A taste of experiential travel – by leesan

A taste of experiential travel – by leesan

New South Wales has some fun hands-on travel experiences that are worth checking out.

CAREEN is a medical graduate living in the Australian state of New South Wales (NSW). Since young she has been helping out at her family’s oyster farm in the northern Sydney suburb of Brooklyn. One could say that she has a lot of expertise in oyster farming, thanks to all her experience.

She grumbles that the oyster farm has constantly come under the assault of bad weather and contamination by unknown bacteria, which could invalidate all their efforts overnight.

And as if that is not enough, the price of raw oysters is very often hijacked by major distributors, leaving the smaller, family-owned farms with barely enough profit to feed everyone at home.

More than two years into the pandemic, the sale of oysters has become stagnant, prompting Careen to think of ways to add value to the family venture.

Many people love oysters, but few know how they are processed or where they come from. So Careen thought, “Why don’t I drive the tourists to our oyster farm at the bay and tell them more about oyster farming and how to do it without disrupting the ecological balance?

“Perhaps the tourists can even get to crack open a freshly caught oyster and savour its sweetness.”

She then jumped into action and started working on turning her idea into a reality. She submitted a proposal to the city government and managed to secure the country’s first permit for “oyster farm tourism”.

Like any other farsighted people around the world, Careen knew how to maximise the void in the midst of the pandemic to advance her idea. It helps too that Destination NSW – the state’s official tourism agency – continuously helps local travel operators promote and market their creative products overseas.

At 9am sharp one morning, Careen personally manned a 20-seater flat-bottomed boat to welcome 17 of us at the jetty. We were the first group of foreign tourists to join her oyster farm experiential camp so it was very exciting for everyone.

The boat slowly cruised into the quiet Hawkesbury River at Mooney Mooney, where many oyster farms are situated.

Careen said that most of the oysters you find at Sydney’s seafood markets come from this bay. She talked eloquently about the process of oyster farming, telling us interesting things like how an oyster spat would cost RM0.25 but after four or five years, a mature oyster typically fetches up to … sorry, that’s a trade secret, she says!

Later, we put on the specially manufactured wading jackets and went into the water. In the middle of the water there were high tables covered with white cloth, and a spread of seawater tiger prawns and other marine delicacies waiting for us. But those were nothing compared to Careen’s home-bred raw oysters. Each of us was given 18 oysters which we had to crack open ourselves. We were served white wine to pair with the oysters. What an unusual fresh oyster dining experience in the sea! 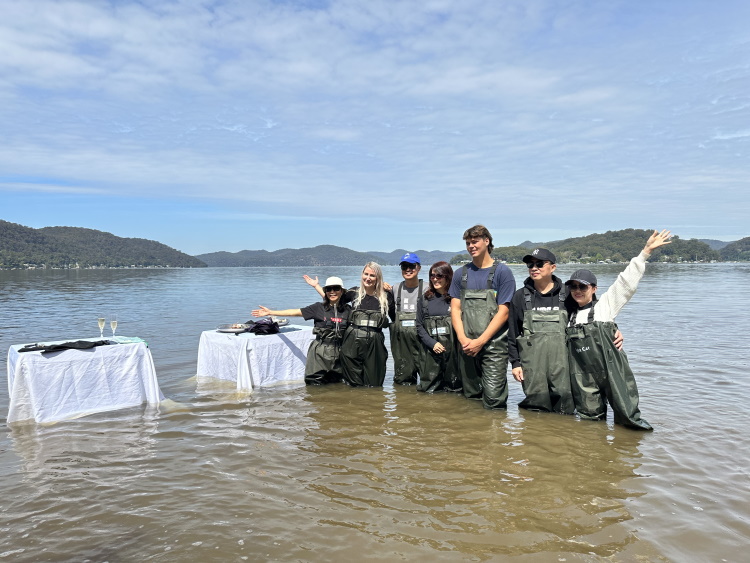 Careen(second from left) with some of the Malaysian travellers who visited her family’s oyster farm.-Photos: Apple Vacations

That’s actually what I want to focus on in this week’s column – experiential travel, something that Malaysia can definitely excel in, especially in the ecotourism sector.

For example, glamping and camping experiences have been gaining popularity in Malaysia, possibly a result of being cooped up at home for about two years.

Apart from that, our Musang King durian is also well known around the globe, especially among the Chinese, If we take advantage of the durian harvesting season and offer tourists to stay overnight at the durian farms, they would be able to partake in the joy of listening to the sound of falling durians early in the morning, helping the owner pick up the fruits and of course, eating them. Isn’t that a win-win formula?

In NSW, there is another travel experience worth checking out, this time in Hunter Valley, one of the most celebrated wine-growing regions of Australia. This region boasts over 150 vineyards that grow a wide variety of grapes from all over the world. These grapes are then fermented and processed in unique Aussie ways.

Here, the old generation winemakers will dump the freshly harvested grapes into a big wooden barrel, that will later be trampled on by two barefeet men in a bid to squeeze out the juice. We had a lot of fun trying this traditional wine-making process that has been passed down for generations. 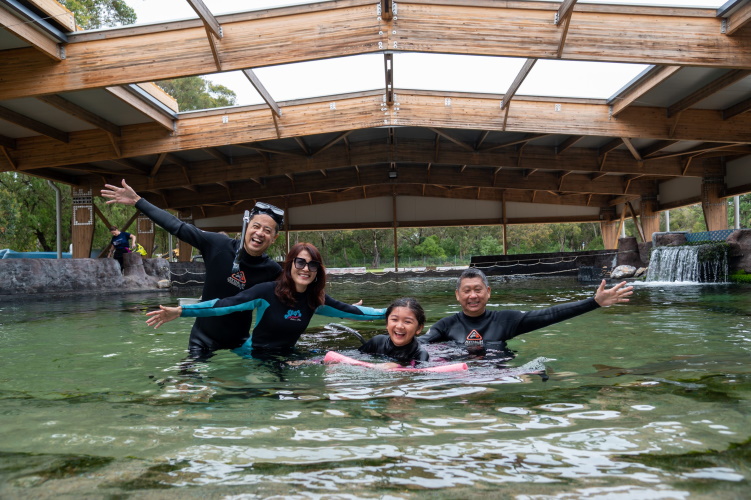 The writer(right) and his travel buddies enjoying the Irukandji Shark & Ray Encounters at Port Stephen.

In Port Stephens, there is also a uniquely-themed experiential aquarium where we can soak ourselves in the 10m-deep seawater pool complete in diving suit and goggles, and swim with dozens of stingrays and sharks. Those preferring to stay dry can opt to sit on the man-made beach and listen to the guide’s colourful stories of marine life. It’s a really fun learning experience.

Such participative experiential travel products are becoming increasingly popular among the new generation of travellers. They are not only something new to try, but also educational and inspiring too.

To be honest, the conventional way of travelling that includes a visit to a heroes’ monument, a church, some sightseeing attractions followed by a group dinner, is beginning to lose its appeal among modern travellers.

But enough about that. Let’s go back to Australia, the land of vast emptiness, unparalleled natural beauty and rich resources. Australians are known for their exceptional civic-consciousness and are also creative people. 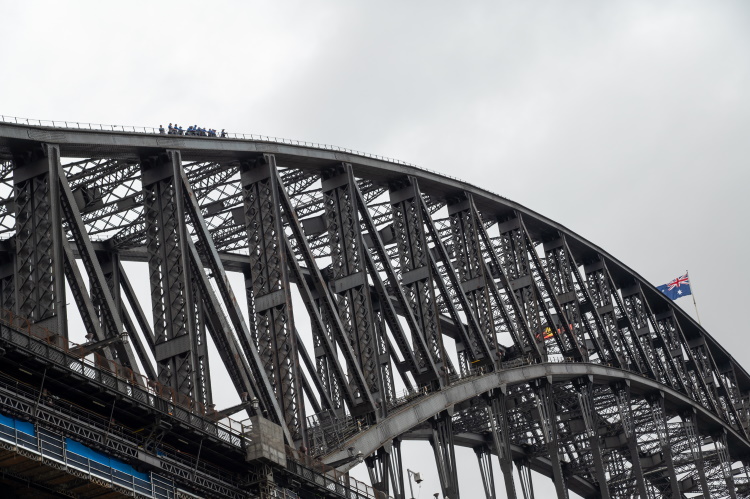 Did you know that you can climb the Sydney Harbour Bridge?

Sydney Harbour Bridge and the Sydney Opera House are the two of the most iconic landmarks in the country. The New Year’s Eve fireworks extravaganza at Sydney Harbour every year attracts countless of people to the city, counting down and cheering with Sydneysiders. It’s a spectacular show that is also watched on TV by nearly 7.8 billion people, some of who might dream of travelling here one day to scale the legendary Harbour Bridge or enjoy a show at the incredible opera house.

The wonders of NSW do not end just there. For three weekdays from the end of May each year, the Sydney Opera House will come alive with a splash of colours as laser images and patterns are projected onto its external walls during the Vivid Sydney light and music festival. This festival once attracted more than 2.5 million tourists, which of course translates to a high tourism revenue and contribution to the country’s GDP.

The NSW spring vacation this year will surely make some travellers wonder just how fun the Land Down Under could be. I believe that the fun of travelling involves some hands-on participation and engagement, actual real-time experiences and also some sensory stimulations.

Are you ready to head Down Under now?

Leesan, the founder of Apple Vacations, has travelled to 134 countries, six continents and enjoys sharing his travel stories and insights. He has also authored five books. 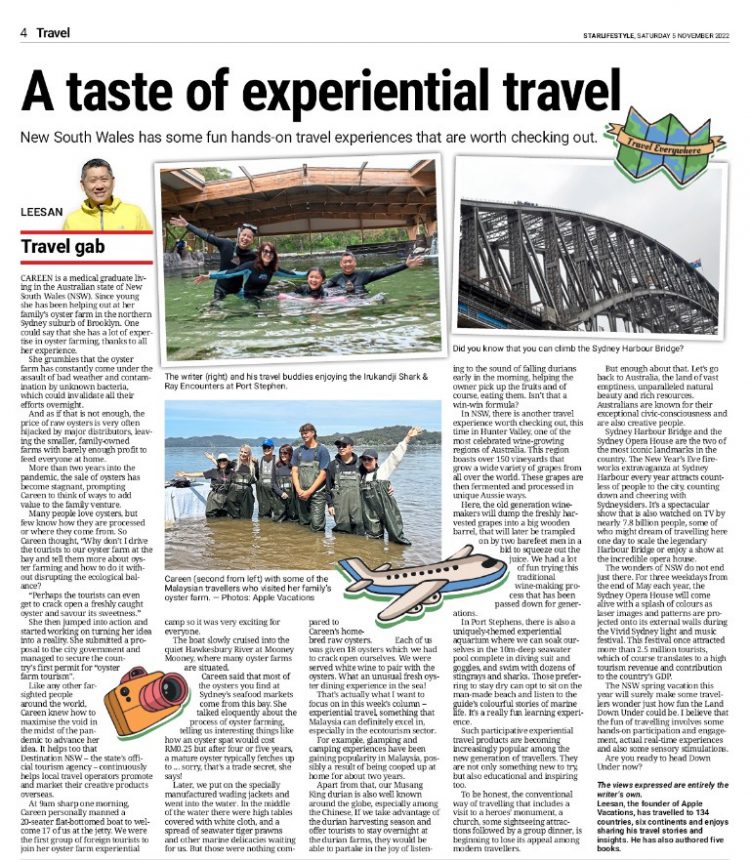