With a waterproof camera and swimsuit in the bag, I set off with a group of 13 to discover the true Songkran experience in Chiangmai and Bangkok.

What I have often heard of about Songkran is all about splashing water at one another. But what was the real meaning behind this? With a waterproof camera and swimsuit in the bag, I set off with a group of 13 to discover the true Songkran experience in Chiangmai and Bangkok.

Before diving into the fun, let’s take a look at what is Songkran all about. Songkran is derived from the Sanskrit language which means to pass or to move into. As the timing is in the beginning of spring season, Songkran is the traditional New Year according to Thai calendar. Some countries in this region (like Myanmar, Laos and Cambodia) also celebrate their New Year around this time. This traditional New Year in Thailand usually falls around 13th to 15th of April.

As it is the traditional New Year, there are several rituals that are practised in the celebrations. Songkran is a time when it is a long holiday and most people return to their hometown. The younger people will visit and pay respects to their elders in the family including people in their community and monks as well. They pay respect by sprinkling scented water onto the elders’ hands and ask for their blessings. This is also the time when they perform their annual rites of showing respect to their ancestors. On the day of New Year, the people will go to a Wat or temple to pray and give food to the monks. Another ritual is the “bathing” of Buddha images by gently pouring water mixed with flower petals and fragrance. It is believed that it will bring good luck and prosperity in the New Year. This is also a time when everyone tries not to say bad things lest bad luck befall.

The most famous Songkran festivals are traditionally celebrated in Chiang Mai at northern Thailand where the festival usually lasts up to a week. In Chiang Mai, there is a unique ritual where people carry sand to the temples and pour them into the pagoda-shaped bamboo frames decorated with colourful flags. The purpose is to compensate for the sand that they have carried away by their feet over the past year. 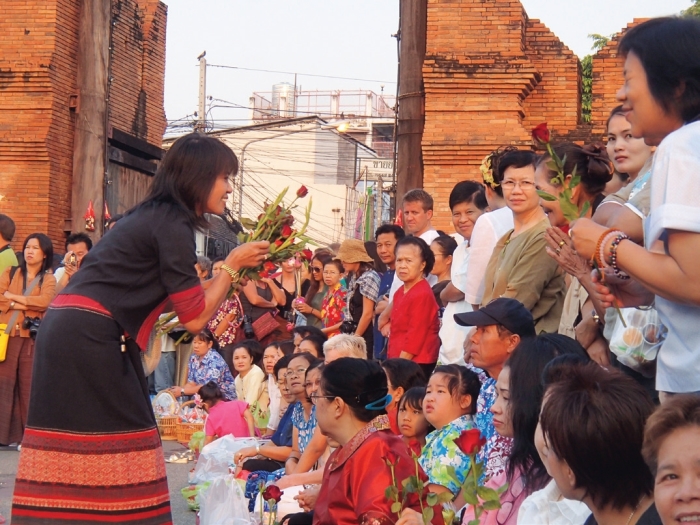 Locals dressed up in their best costumes for the festival 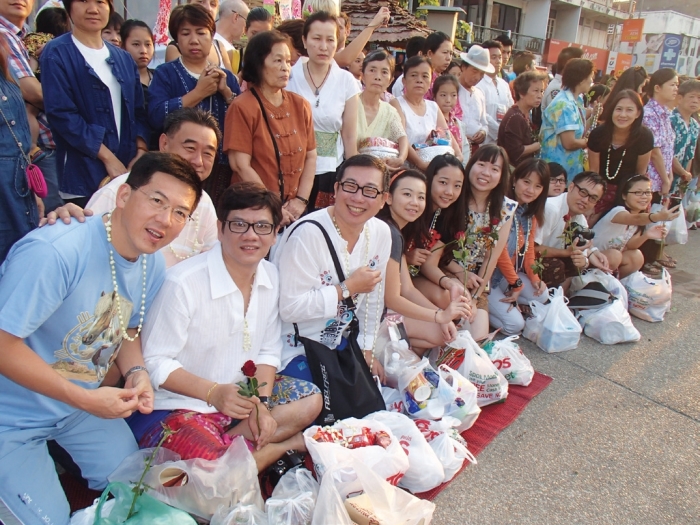 Waiting in line for the alms giving ceremony

We kicked off our Songkran celebration very early on 13th April. We were already at the Chiang Mai Tha Phae Old City Gate by 6:15am waiting for the arrival of Thailand’s Prime Minister Yingluck Shinawatra to officially open the Chiang Mai Songkran Festival. The festival started off with the alms giving ceremony. We have brought bagsful of food items like noodles and biscuits to be offered to the Buddhist monks. Everybody faithfully joined the queue and put their offerings into the bowls carried by the monks.

Once the alms giving ceremony was over, it was festival parade time! Boys and girls dress in traditional costumes lead the parade with the banging of gongs. Then, followed by the beauty contest of Lanna girls (with umbrellas) riding on bicycles. In Thai language it is called Mae Ying Kee Rod Theep Kaeng Jong. (Note: Lanna is the name of the ancient Kingdom in Northern Thailand). This kind of beauty contest is a special event held in Chiang Mai. 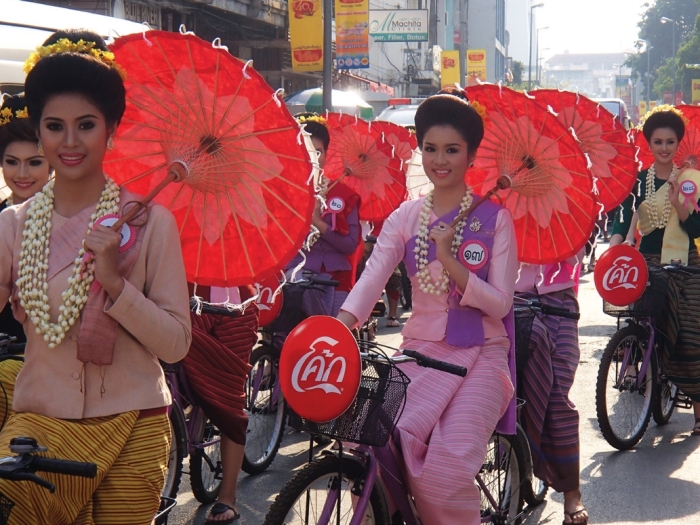 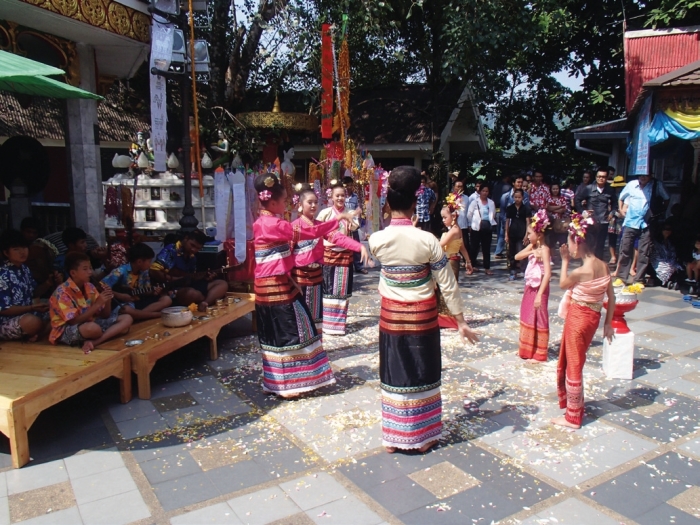 Following the traditions of Songkran, we went for prayers at the Wat Phrathat located at Doi Suthep. To many Thai people, Wat Phrathat is considered as a sacred temple. Arriving at the base of the temple, you may choose to climb the 309 steps to reach the pagoda or take a tram at 30 Baht one way. This temple was believed to have been built more than six hundred years ago. According to the legend of the white elephant, the king placed a relic believed to be Buddha’s bone on the back of the elephant and released into the jungle. The elephant climbed up Doi Suthep and trumpeted three times before it died. The king then ordered the building of this temple at the site where the elephant died. Wat Phrathat has a large golden chedi where devotees circle it three times clockwise while chanting prayers. As this temple was built on a mountain, visitors can enjoy views of Chiang Mai city from the temple grounds.

(Note: Visitors must be dressed appropriately and remove their shoes before entering the temple grounds. Sarongs are available for rental.) 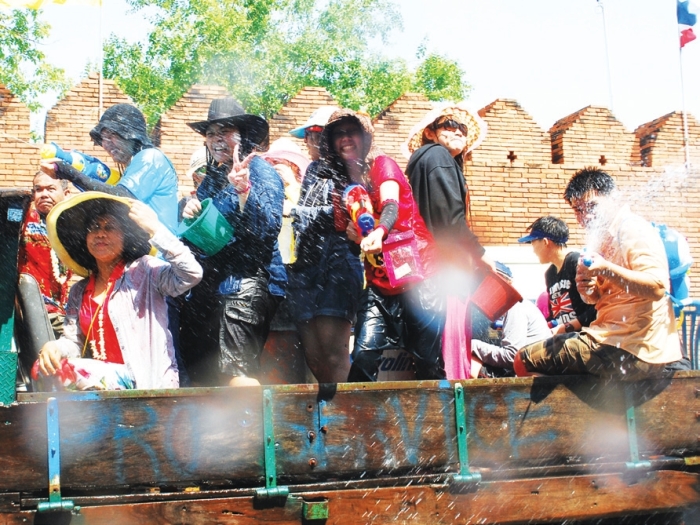 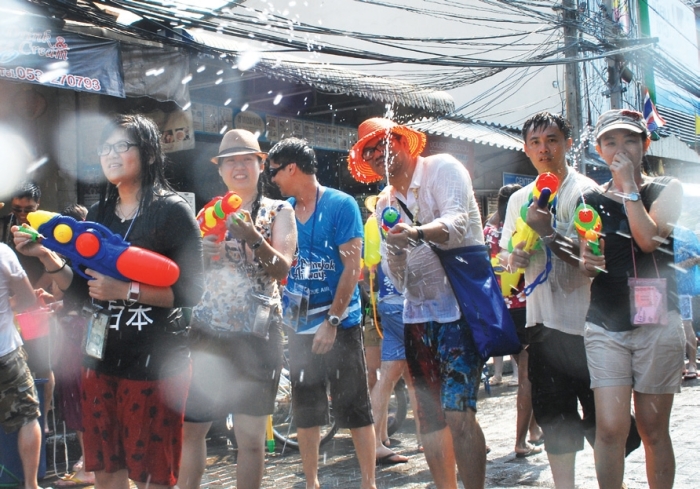 Everybody had great fun at Chiang Mai Songkran

When the rituals are all over, the war of water begins the moment we left the temple. We were almost soaking wet even before we arrived at the city gates. The water fights and water splashing proved to be a favourite of both locals and tourists. It is also a welcoming move to douse people with water to relieve the heat as the afternoon temperature could be a soaring 40oC on some days. Fun seekers gathered around the old city gates and practically every where in the city. It was simply fun shooting water and also shooting pictures with my waterproof camera. Everybody was in a jovial mood. When your water gun is drain out, just refill it at any water tanks or taps available. You could also refill with water from the moat surrounding the old city gates. Actually weeks before Songkran, the moat was given a thorough cleaning to ensure clean water is available during this festival.

Well, over in Bangkok, the Songkran festival comes splashing with a twist. It is not only water, ice water and chalk powder, they even have foam splashing. Many people especially the younger ones jammed the Central World square, dancing to hot music spinning from the DJ’s deck and have themselves doused with foam churned out from foam machines.

It was truly a whale of experience to be a part of the Songkran festival in Chiang Mai and Bangkok. Well, before we left Thailand, I have already noted in my calendar – I will be back in 2013. 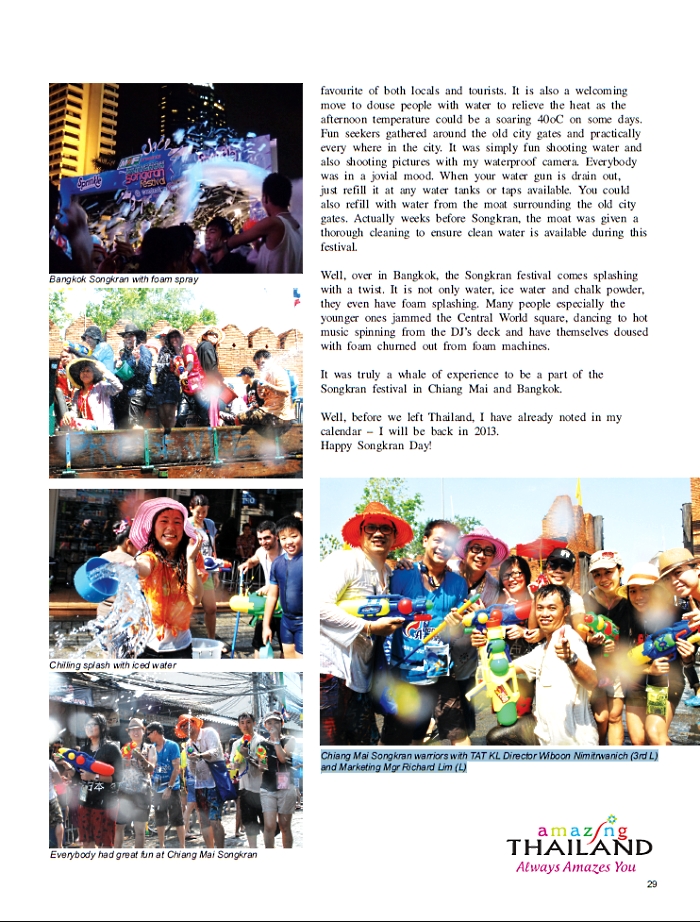 Putrajaya • A City in the Garden

Apocalypse tourism: Where will you celebrate doomsday?