The head of the family – the alpha male Ubumwe – was sound asleep. He was big. Real big. He is said to have 25 members, including black backs, juvenile gorillas, adult females, and young ones.

Gorillas in East Africa: ‘Off The Beat’ adventure of a lifetime! 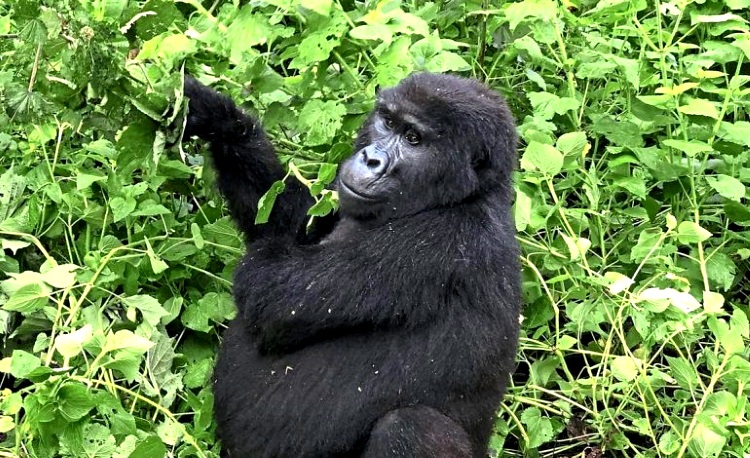 Gorillas in East Africa: ‘Off The Beat’ adventure of a lifetime!

It had taken over a year of planning and some serious saving, too, for me to make the long journey to East Africa to spend the year-end holidays trekking in the jungles of Rwanda and the Uganda-Congo border. The point of my pursuit? To look for gorillas.I could barely sleep on the morning of the trek – I was already wide awake at 4am, even though we were only expected to leave the lodge at 6am. The excitement that was building was already pumping adrenaline through my veins, with the prospective primal experience getting me giddy in those wee hours.

It’s a cliché, but it was certainly an adventure of a lifetime to simply be in the presence of the gorillas in the majestically mist-covered 160sq km volcano national park of Rwanda.

Not unlike all my previous jungle and sea journeys, my friends and I noticed that we were the only Asian trekkers at the park headquarters, which is where all trekkers congregate to begin their adventure into the wild.

We were assigned to the Amahoro – the name of the ape family, which simply means peace in Kinyarwanda, an official language of Rwanda and a dialect of the Rwanda-Rundi language.

The guides and porters assured us that it would be a peaceful climb, as the name suggested.

We were told it would be relaxing, comfortable and serene, and we would enjoy the walk together – after all, this family is led by a silverback named Ubumwe, which means “togetherness”.

Eager to just get on with the climb up the slopes of Mount Bisoke, where these gorillas would be found, I wasn’t in the mood to listen to the finer details.

Since we had informed the organisers a day earlier, that we preferred a “moderate” climb, I had assumed that they had heard us, expecting terrains like Bukit Apek or Bukit Kiara in Kuala Lumpur.

What had started as a pleasant walk through the village of farmers, with their bountiful supply of Irish potatoes, maize and cabbages on extremely fertile lava ground, soon turned into a very steep hike through a mud-covered forest.

No one told me that the homes of these gorillas were 1,700m above sea level (or was I not paying attention?), and despite having watched enough Tarzan and King Kong movies, I was still clueless about the nettles and other thorny plants, whose little pins pierced through my skin despite me wearing a long-sleeved shirt and gloves.

And although I wore proper hiking shoes, I lost count of the number of times I fell as the terrain was rough on the many patches of wet slopes.

“I don’t think I can do this once I reach 60 years old. It was the right decision to make this trip now,” I told my wife, who kept asking me if I needed to stop to catch my breath, since my “face has already turned pucat” – or pale. At such high elevation, the air was also noticeably thin, naturally.

I was later told that Malaysians in another group had a more accessible and easier path, as the gorillas they were meant to see live right at the edge of the park on lowland!

At first, I was reluctant to pay US$10 (RM42) for a porter – I am a Penangite, and that’s a lot of money! – whose job only seemed to be to carry my backpack containing just my cameras and a rain coat. Of course, I soon found out that the porter would come in handy as the person to grip my hands, help push me over tricky spots, and enable me to balance myself!

It turned out to be an almost three-hour strenuous hike to reach the gorillas, and each time my legs wobbled under me, they kept encouraging me to push on, cunningly refusing to answer my incessant question, “Is it near already ah?”

But soon, all my pains and panting disappeared when I suddenly heard a gorilla thumping its chest! A real King Kong moment! 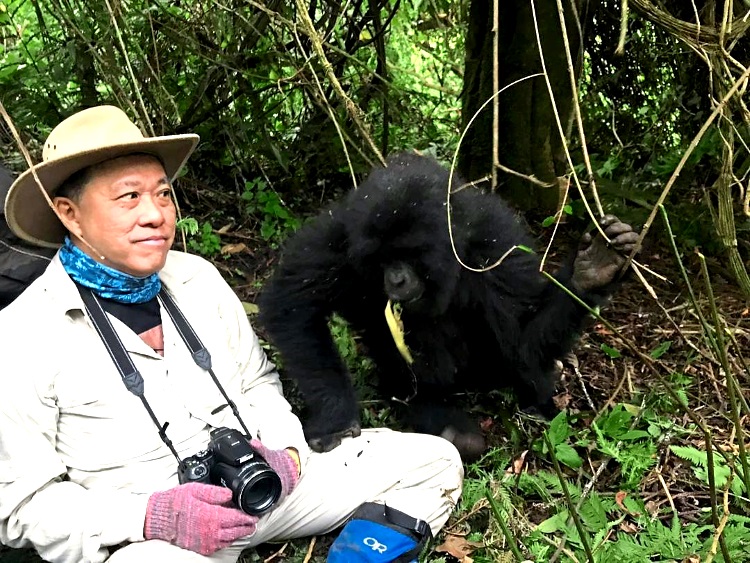 It is possible to get very close to the primates in Rwanda, but only when your ranger gives the all clear. Photo: Florence Teh

At this point, being the one in front, I had the audacity to turn around and instruct the rest to shut up, stop grumbling and remain silent, as we had finally reached the home of the Amahoro family!

The head of the family – the alpha male Ubumwe – was sound asleep. He was big. Real big. He is said to have 25 members, including black backs, juvenile gorillas, adult females, and young ones.

The juveniles were more playful, and obviously, no strangers to human beings. We were constantly reminded to keep our distance from these primates, as they are still wild animals and remain unpredictable.

The jungle surroundings were dark, and we were concerned that lighting was going to be an issue for our photos, since these are no flash zones. But my wish came true when a young one sidled up and touched me.

It happened in a flash, and before I could process the unexpected magical moment of being up and close, where I could feel the hairy ape rubbing against me, the moment was over, but not before leaving me stunned. 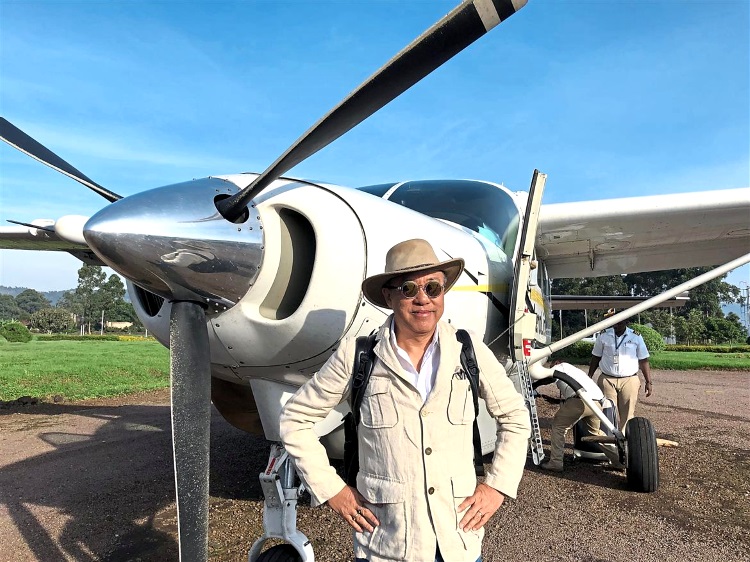 At an airstrip in Kisoro, Uganda on the way to Bwindi National Park. Photo: Florence Teh

We took our positions on the uncomfortable ground and spent the next hour – the maximum allotted time – just admiring these beautiful creatures, listening to the grunts and growls of the bigger family members and the whimper of the young ones. And just like human beings, they can elicit loud farting sounds, too.

It was hard to restrain ourselves or temper our excitement as we kept snapping away with our cameras. We could do little but just soak in the incredible moment, absorbing every second and minute, which we will treasure for a lifetime.

After our time with the gorillas in Rwanda ended, we flew to the Uganda-Congo region to continue our search for gorillas at the Bwindi Impenetrable Forest, situated along the Democratic Republic of the Congo (DRC) border, next to the Virunga National Park and on the edge of the Albertine Rift. Composed of 331sq km of both montane and lowland forests, it is accessible only by foot.

According to a 2012 census released by the Uganda Tourism and Antiquities Ministry, there are at least 400 gorillas from the 302 in 2006 at the park alone, and over 80 in Mgahiga Gorilla National Park, amounting to 480 mountain gorillas in Uganda and a world total of 880, divided between Uganda, Rwanda and Congo.

Apparently, 36 gorilla families live in Bwindi Impenetrable National Park, but only 11 are habituated and accessible to visitors, according to a report. 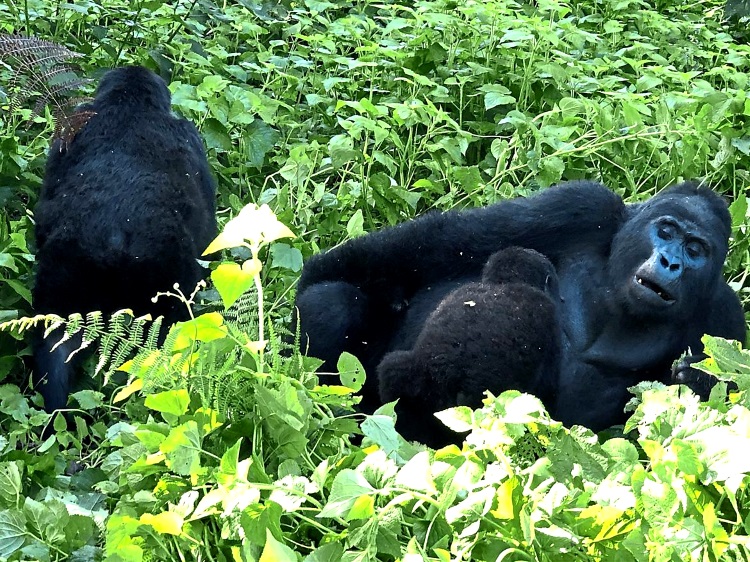 The Bwindi Impenetrable National Park, Uganda is a haven for the endangered mountain gorilla. Photo: The Star/Wong Chun Wai

Having “suffered” in Rwanda, I made sure I was grouped in the “easy” category, so the rangers were more sympathetic to my pleas (complaints?) and took us down an easy path – a short distance from the lodge we were staying at! We later joked that these were “hotel resident gorillas”.

Initially, we were cynical and dismissive when the lodge manager welcomed us upon check in – his claims of gorillas cruising the hotel grounds seeming far-fetched.

There were photographs as evidence, but because the manager said so in a rather nonchalant manner, we just laughed it off. But guess who had the last laugh? Clue: it wasn’t the gorillas.

The even ground, and the more flexible rangers, enabled us to take close shots of these gorillas by simply using our mobile phones.

When I enquired about how close I could get to these gorillas, the rangers merely encouraged me and assured me I would only need to stop my advance when they said so.

“Go ahead, don’t worry, get nearer, take all the pictures,” one ranger whispered to me, and of course, he would also remind me later that it was Christmas, and that “daddy” – as he kept addressing me – was a very good person. Translated: please give me a good tip. I got the drift. 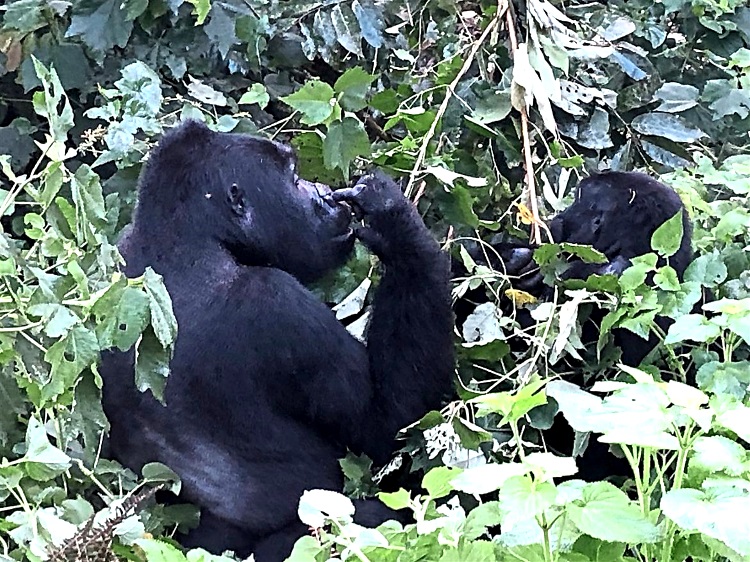 A gorilla in the Volcanoes National Park, Rwanda. Photo: The Star/Wong Chun Wai

Still, he was strict when the hour was up, as he gave me an uncompromising look and told me not to “stress the gorillas” anymore.

Scientist Dian Fossey, who was dramatised in the highly-acclaimed movie Gorillas In The Mist, and paid with her life for her crusade in protecting the vanishing African mountain gorillas, had certainly created a lifetime of awareness.

She was found brutally murdered at a remote camp in Rwanda in 1985, most likely by poachers. While she opposed tourism, she would probably have taken a more moderate stand today. Gorilla numbers have since grown, and not even one of these amazing animals has been shot for the last 30 years, with the community staying near these parks having benefited the most.

And the most beautiful part of this once-sorry story? Many of these porters used to be poachers.

For me, to be in the presence of gorillas has dramatically changed me, and that one short trip has sufficed to convince me that we all need to protect our wildlife and jungles, and the oceans, too.

We need to pick up from where Fossey, among many others, left off.

Read more about Tips For Malaysians Travelling To Rwanda And Uganda