The idea of diving into a lake to swim with thousands of jellyfishes (of the harmless variety) had never crossed my mind. It was never even on my bucket list, in fact……


Photos and videos by: RICKY MOSIEWA

The idea of diving into a lake to swim with thousands of jellyfishes (of the harmless variety) had never crossed my mind. It was never even on my bucket list, in fact, until I recently read about the famous jellyfish lake on the tiny Pacific island of Palau being shut down.

The lake, which was home to over two million non-stinging jellyfishes, has been closed to visitors because several years of dry weather killed them all.

Toxic sunscreen, used by tourists, was also blamed for the decimation of the fascinating creatures there.

As diplomatic ties between Palau and China took a dip over the former’s refusal to sever relations with Taiwan, things got worse. The Chinese government retaliated by forbidding its citizens from travelling to the island.

Tourism is Palau’s largest revenue source, but visitor numbers have dropped drastically following China’s ban. Chinese tourists have made up 13% of Palau’s tourists so far this year, compared with 48% in 2017.

Meanwhile, the Palau government said it wants to push for “high quality, low volume tourism” amid concerns of the island’s overcrowding and pollution by unmanageable numbers of tourists – a euphemism for the Chinese tourists.

And there were even not-so-subtle allegations that the huge number of suntan-covered mainland tourists were responsible for killing the jellyfishes with the use of their lotions containing toxic chemicals.

Chinese tourists have earned a worldwide reputation for not wanting their pale skin to be tanned, and often even fully cover themselves up at tropical beaches. That was enough to fire up my passion for swimming with these invertebrates, and I knew I had to do it – before they disappear from the face of the Earth forever.

A quick search on the Internet showed that I had a few options, including the Raja Ampat archipelago, off the Indonesian province of West Papua. It’s home to thousands of giant golden medusa jellyfish, but it’s also near impossible to get to.

Then, there is the more accessible Cruz Island in Zamboanga, Philippines, except that the territory is known for kidnapping and terrorist activity. I wasn’t convinced anyone would want to pay ransom to kidnappers for a fool who travelled there in search of jellyfishes.

But the good news was that Kakaban Island, in East Kalimantan, Indonesia offered the best and nearest option. I just needed to fly to Tawau in Sabah, and then catch a connecting hour-long flight to Tarakan in East Kalimantan. 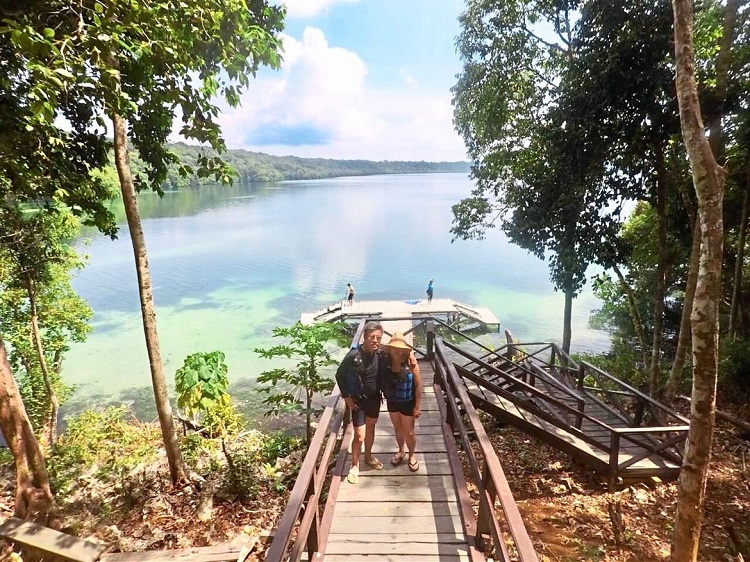 The writer and his wife at Kakaban Lake, home of thousands of jellyfishes.

From Tarakan, I had to take a three-hour speed boat ride to Maratua Island, which meant I had to mute nature’s call the entire non-stop trip!

After a night on Maratua, I began my island-hopping to Kakaban, a 774-hectare limestone island. In the local dialect, Kakaban means “hug” as it looks as if it is hugging the lake away from the sea, I was told.

Once we arrived at the jetty, we disembarked and followed the path made up of huge wooden stairs and long walkways through the rainforest, right through to the jellyfish lake.

Following a short 10-minute trek, the walkway opened onto a platform on the picturesque lake, which was once part of the ocean but separated a long time ago.

It is said that the jellyfish had no predators in the lake, and so, eventually evolved to lose their stingers. Other reports suggest they still have stinging cells but have evolved to become harmless to humans.

The four kinds of jellyfishes found in the lake are the aurelia aurita (with its transparent body), the tripedalia cystophora (which only measures the size of a fingertip) and the mastigias papua, with its green-brown bulb, and seen in abundance. Then, there is the cassiopea ornate, which is oriented upside down while their tentacles are upright.

In fact, what made Kakaban different from the rest is that it is the only lake with four types of jellyfish, and a huge number of fish and crustaceans beneath.


Having done my research before the trip, I was explicitly aware that the number of jellyfishes in Kakaban could not match the huge numbers in Palau.

The water at Kakaban was also not as crystal clear as that of Palau’s, at least from the videos and pictures I had seen.

The former was a little murky as the bottom was covered with marine green algae. The lake’s water is a mixture of salt water and fresh water from rain.

Obviously, the lack of visibility didn’t help in the videography, but my wife and I couldn’t contain our excitement when we jumped into the lake. She was lucky as she managed to hold a jellyfish by its transparent body.

We didn’t find the jellyfishes intimidating as we knew they were harmless.

There was really no need to stray too far from the platform as there were enough jellyfishes swimming, dancing and bouncing around, just a short distance away.

I was a little concerned because I had read that there was a steep wall which drops 190m, and currents can be strong with upwelling, down current and reversing direction. Another report revealed that the deepest part was 17m (56 ft), with poor visibility.

The beautiful Kakaban, which is recognised as a world heritage site, is still generally difficult to access. That means less commercialisation, but it also pained me that trash, such as plastic bottles, was left uncollected. 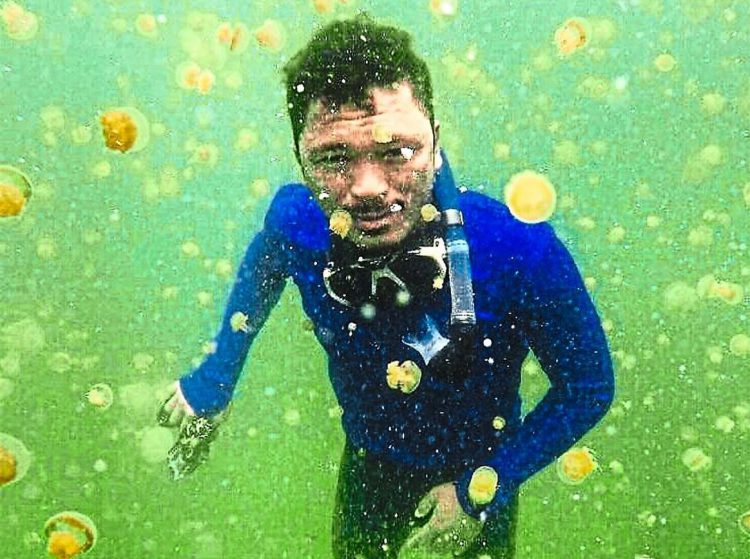 The writer’s guide Ricky Mosiewa with thousands of jellyfishes surrounding him in the waters off the island.

What a shame, because CNN Travel rated Kakaban third on the list of 10 best dive sites in Asia.

It was the same sad sight on the nearby islands of Maratua and Sangalaki, where uncollected litter was strewn everywhere.

Strangely, many of these culprits are the local villagers who don’t realise that they stand to gain the most from a clean environment since they depend on tourism.

Maintenance, preservation and cleanliness are obviously absent from the minds of the Indonesian authorities, and that’s alarming.

From my chalet at Maratua, it was a joy to see four turtles and even a stingray swimming nearby, along with hundreds of fishes.

Over the past couple of years, I have developed a strong emotional attachment to the ocean and jungles, with the sea creatures and animals, so much so I have almost lost interest in big cities and their artificial malls and structures, including the rude and selfish city folk.

“The swim with thousands of jellyfishes has made me marvel even more at God’s amazing creations and ponder how insignificant we are in the big picture.”
– by Wong Chun Wai –