Off The Beat:A Noah’s Ark in Hong Kong? You better believe it!

It’s just bizarre. I never would have thought a Christian-based theme park could exist in money-worshipping Hong Kong.

I have visited this hardcore capitalist city for decades and no one ever told me about a replica of Noah’s Ark, built to the exacting specs conveyed in the Bible. In fact, many Hong Kongers are clueless about its existence.

I don’t blame them, though, because Disneyland and Ocean Park are obviously greater draws for tourists, especially kids. And surely, next come shopping and food in the pecking order. So, a faith-based theme park was always going to be of secondary interest.

But having seen plenty of old movies of the great floods, where the Genesis relays how God spares Noah, his family and a remnant of all the world’s animals, curiosity naturally got the better of me.

Getting to the theme park wasn’t exactly easy as I had presumed, as it is not listed in most Hong Kong tourism websites.

It’s located on Ma Wan island, and for some odd reason, private vehicles are not allowed into this evangelical spot.

My Hong Kong friend, who was carting me around, encouraged me to take the subway to the nearest station, Tsing Yi, and then hop onto a taxi there.

“It’s very easy. Everything in Hong Kong is easy. Just take a taxi from there … I can’t drive you there. Enjoy, see you tomorrow,” he said and quickly put down the phone.

Credence was given to the adage that God works in mysterious ways when no taxi drivers wanted to take me there following an accident which caused a traffic jam on the bridge.

So, like a trouper, I took a bus. But it, too, got stuck in the snarl for almost 30 minutes. When I finally reached the place, I realised I was the only one who hopped off the bus. I could almost feel the strange looks from the remaining passengers on board.

I looked at my watch – I only had an hour to roam the theme park before it closed, and as expected, it was deserted. 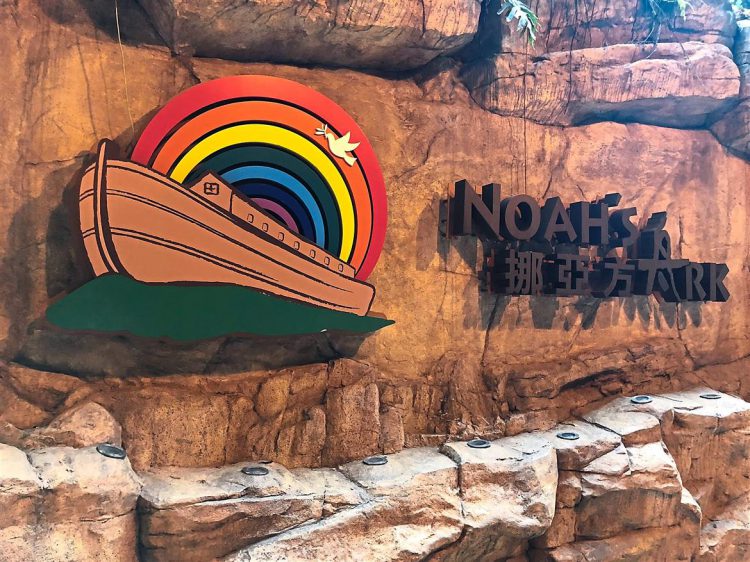 he Noah’s Ark theme park in Hong Kong does not get too many visitors.

The park’s centrepiece is, of course, a full-scale simulation of Noah’s Ark. It’s a massive four-storey building – simply humongous. Of biblical proportions, for sure.

In the Bible, God commands Noah to build a boat that is 300 cubits long, 50 cubits wide and 30 cubits high in advance of a great flood, but no one can translate that measurement in the modern world.

Noah’s Ark is said to have been the largest seafaring vessel ever built up till the late 19th century.

Modern shipbuilders have said the Ark’s length-to-width ratio of six-to-one provided excellent stability on the high seas and it would have been almost impossible to flip, revealed another report.

While the empty venue was discouraging, since most people would expect to hear laughter, excitement, music and crowds at any ordinary theme park, I was bewildered at the massive size of the place because it’s obviously not raking in the bucks.

A team of workers was seen meticulously cleaning up the place, although I saw no litter, while all the restaurants and shops were fully attended to by staff.

The park sits on an incredible spot, offering visitors a spectacular view of the sea, and the bridge. It is a perfect spot for a wedding picture, or to propose to a loved one.

And right there were the sculptures of 67 life-size pairs of exotic birds and creatures alighting from the boat. 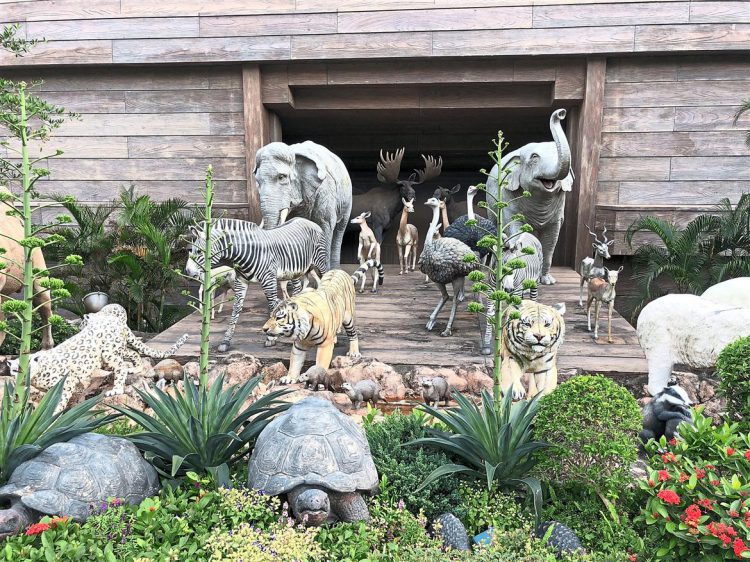 The animals at the theme park, of course, came in pairs.

They looked happy and eager, and displayed none of the intimidating, cultish kind of behaviour that could set suspicious minds wandering.

Inside the “ark”, the park features amusements designed for young children, along with a collection of small animals (mostly reptiles) in little display cages.

Like any theme park, this one also has a multimedia experience, including a 180° widescreen theatre, complete with motion seats, and rain effects.

The multimedia experience begins with an introduction to Judeo Christian teaching from the time of Moses.

The park was built by two brothers, Thomas and Raymond Kwok, Hong Kong real estate developers who, according to the Bloomberg Billionaires Index, control a HK$15bil (RM8.02bil) fortune between them. Thomas and his wife converted to Christianity after completing an 11-week Alpha Course, aimed at introducing the faith to non-Christians, mostly.

According to reports, during the late 1990s, the Hong Kong government planned to construct a sprawling suspension bridge connecting the bustling city to a new airport across the Rambler Channel. “Complicating matters, however, was an undeveloped island which would be roofed by the new bridge. “Miraculously, a unique three-way partnership between the Hong Kong government, a pair of billionaire developer brothers, and a group of Christian organisations emerged with a plan to cover the island with a ‘remarkable’ theme park,” the report said.

“The recreated Noah’s Ark was built precisely to the biblical dimensions with a length of 300 cubits (450 feet), and the park markets itself as a creationist and family-centric vacation destination.”

Next year, the park celebrates its 10th anniversary, but dark clouds have hovered since the arrests of the two brothers.

In 2012, the Kwok brothers were charged with bribing Rafael Hui, the former Chief Secretary of Administration, to the tune of HK$4.5mil (RM2.4mil).

In December 2014, Thomas Kwok was convicted of “conspiracy to commit misconduct in public office”, while his brother Raymond was cleared of all charges. Thomas was sentenced to five years in prison and fined HK$500,000 (RM267,249). Hui, Sun Hung Kai, executive Thomas Chan and businessman Francis Kwan were also all jailed. It’s obviously a black spot, but the theme park has continued its operations, and the organisation has not given up on its message of devotion, love and certainly, forgiveness.

It is unlikely the typical visitor to Hong Kong would spare time for this theme park but then, I am not the average tourist.

The visit, and the journey to this theme park, in some ways, is a nice wrap-up to the year and the Christmas celebrations. And while much of this fanfare will be routine, I don’t think I’ll ever forget the day I walked through a largely deserted Christian theme park in a remote part of an island metropolis like Hong Kong. For one-of-a-kind experiences, this one’s sure a keeper.

The writer would like to wish everyone a Merry Christmas and a Happy New Year! He will be back to share more of his off-the-beaten-track travel experiences in January. 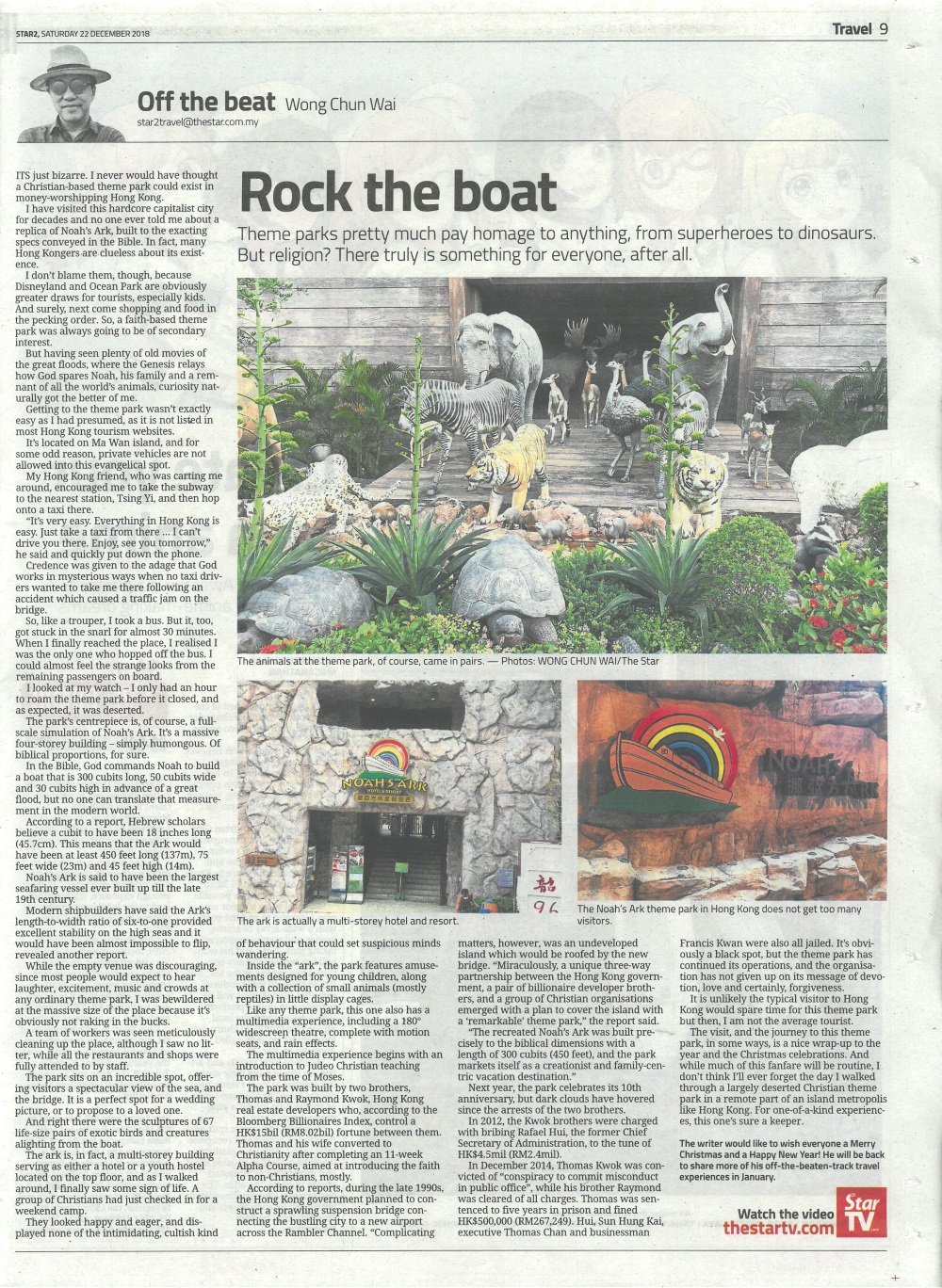