When in Hokkaido, follow the lovely scent of lavender 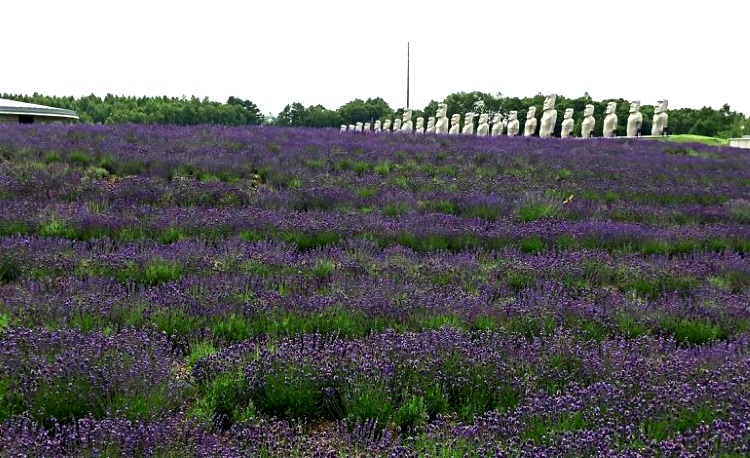 For those who don’t know, the Makomanai Takino cemetery in Sapporo, set up in 1982, is home to one of the most magnificent landscapes bristling with the wonder of lavender. Almost every tombstone is covered with properly manicured versions of the flower, true to Japanese precision.

t’s lavender season in Japan now and thousands of tourists are descending on places like Furano in Hokkaido prefecture, known for its sprawling lavender fields like the one in Farm Tomita, with spectacular views of Mount Tokachi.

It’s a breathtaking view, one that is a visual feast for the eyes. Lavender aside, poppies, lilies and sunflowers also grow lushly in the Nakafurano area.

There’s good reason why this kind of natural beauty is ingrained in the culture – the Japanese take the lavender season seriously because it is a multimillion-dollar industry. I decided to take a detour on a recent trip to my favourite Japanese prefecture, Hokkaido, the northern-most of the country’s four main islands. Was it the dead seriousness of the Japanese in their flower trade that made me want to visit a cemetery? Hardly.

It wasn’t to pay respects to the dead but to pay homage to the jaw-dropping sights (and dizzying smells) of the vast fields of lavender. Sure, visiting a place of burial isn’t exactly what most tourists have in mind when planning their travels, but then again, I’m no conventional traveller. 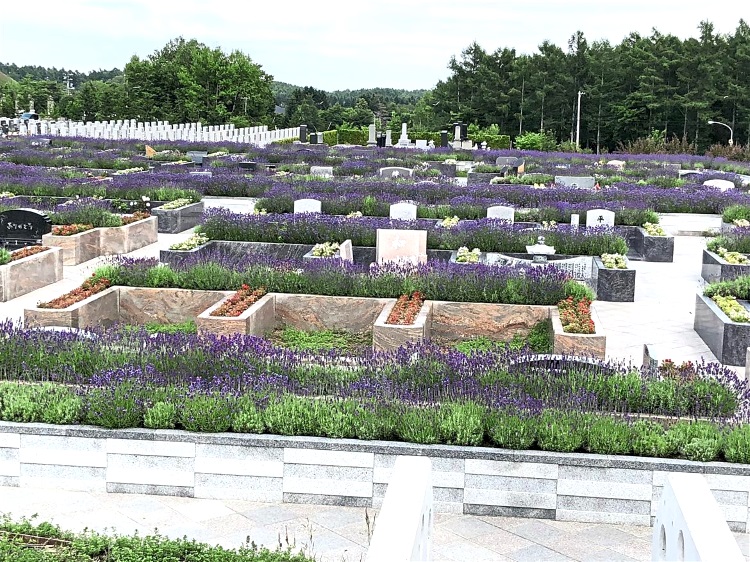 The Makomanai Takino cemetery in Sapporo, Hokkaido, is home to one of the most magnificent landscapes bristling with the wonder of lavender.

The paradox of having so much life and beauty in a place representing death is odd yet stirring to the mind. What I saw was indescribable and simply beyond words, and summer is the best time to take in this amazing scene.

I’d have never set foot there had I chosen the ordinary path of signing up for a tourist package. It is out of the way for most tour operators, and I only had the chance to visit it because I was driven privately and didn’t have an itinerary to weigh me down.

“Any time of year, visitors will have a different experience. The 150,000 lavenders turn fresh green in spring, pale purple in summer and silky white with snow in winter,” as one writer aptly described the changing landscape.

While the trip was mainly planned for viewing blooming flowers, for me, it was even more incredible to catch the sight of a huge stone statue of Buddha within this hill of purple beauty.

The top of the statue’s head, which rises through a circular well at the centre of the verdant mound, is carpeted in 150,000 of the flowers, spread across 180ha of land.

This is the work of award winning Japanese architect Tadao Ando, who is regarded as the greatest Japanese architect in modern times. Ando has become one of the most renowned in his field, winning many prestigious international awards. 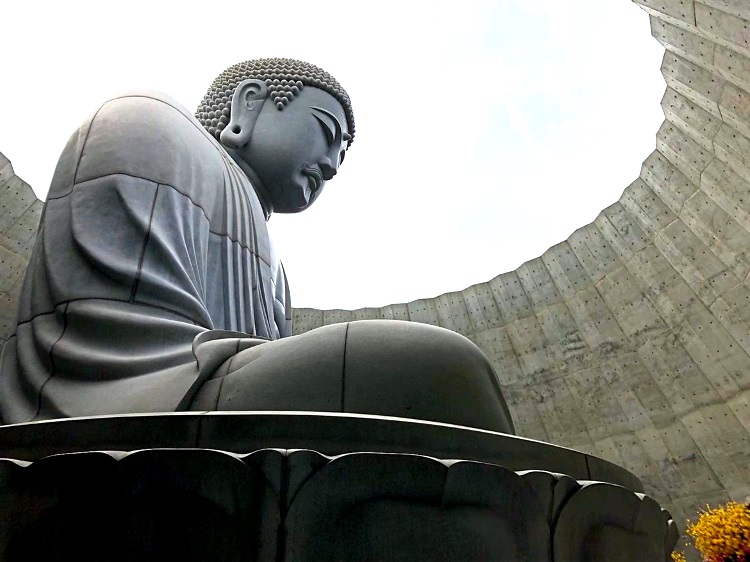 This stone statue of Buddha is the work of internationally renowned Japanese architect Tadao Ando.

Apparently, before the temple was completed, the 13m Buddha sculpture stood alone in a field for 15 years.

“Soon after its completion, the client realised the stone structure was out of scale on its own, giving visitors an uneasy sensation. For that reason, they decided to hire Ando to create a more serene architectural procession for the site,” a report revealed.

However, I was a little disappointed to see the replicas of about 40 Moai (Easter Island) heads on the cemetery ground. I believe it makes little sense because all it does is dent what is otherwise a picture-perfect feel of the place.

Why would anyone want to see fake Moai heads at a Japanese cemetery? It gets worse – there is even a full-size replica of the Stonehenge, a distinctly British monolith. I don’t think Ando would have endorsed these replicas, which have given the cemetery a theme-park feel, a total contrast to its sombre mood.

I dare say, even the permanent residents there would be slighted!

But I wasn’t going to let these disappointments affect my overall impression of this magnificent terrain. It truly is a hidden gem.

This is no ordinary graveyard. And trust the Japanese to have worked on every detail to make visiting it an experience to remember.

Where else but at a Japanese burial ground could I buy lavender-flavoured ice cream to wrap up the trip? Who knew end of the line could amount to a sweet ending.