Unlike regular durian, the kura kura durian hangs just about ground level from its tree when it fruits. It’s presumed that the fruit’s low-lying position gives credence to its name – even a tortoise can reach it.

I knew I had to see the kura kura durian as soon as I learned of the medium-sized, wild fruit’s near-extinct status.

After all, it has already been placed on the red list of threatened species by the World Conservation Monitoring Centre.

Although endemic to Borneo, most Sabahans and Sarawakians I’ve met don’t know about these “tortoise durians” or, durio testudinarum. Likewise, the cluelessness on the Indonesian side of the island, Kalimantan.

Unlike regular durian, the kura kura durian hangs just about ground level from its tree when it fruits. It’s presumed that the fruit’s low-lying position gives credence to its name – even a tortoise can reach it.

Whenever I’ve shown friends pictures of these durians, they’ve always been fascinated by the existence of such a species. Of course, their enthusiasm couldn’t mirror my obsession, and soon, I was itching to “meet” this special durian tree.

Although I regard myself a durian lover, my elevated sugar levels have kept me away from this super delicious king of fruits the past two years.

A Borneo Post report indicated that I could find some kura kura durian trees in Kampung Selanyau, Bekenu Sibuti, about 60km from Miri, Sarawak.

Thanks to my colleague, Stephen Then, who is based in this lovely and famous oil-producing city, the trip was made a little easier since he had mapped out our route into this village.

The two-hour drive wasn’t exactly scenic, but more monotonous with the endless oil palm plantations, although a few “beware of crocodiles” signboards at some river banks immediately caught the attention of this city dude.

Upon reaching the village, we had to stop several times to ask villagers if they knew where these special durian trees were located.

One makcik told me she had tasted the kura kura durian but wasn’t certain if it came from the top of the hill. The hill? Now that was certainly not encouraging.

Continuing our drive along the dusty trail, we once again resorted to stopping to ask for directions, this time from a group of teenagers who swore that no such durians existed in the village. Only regular durians, they said. 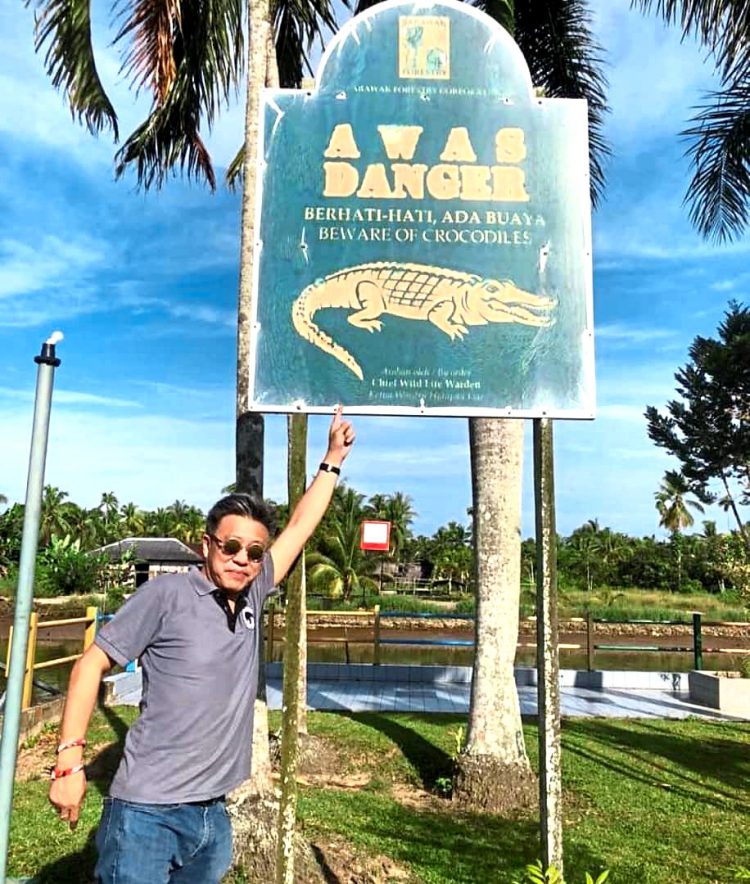 You don’t see many signboards like these in the city. Photo: Florence Teh

The intrepid durian hunter that I am, I wasn’t going to give up, especially since I had flown all the way from Kuala Lumpur to realise this “mission”. If I had to spend the night in a mosquito-infested village, then that’s what I was willing to do.

By this point in the day, Then began to look a little worried as daylight was fast fading, so we needed to find the trees soon.

Finally, we met someone who knew about the trees, and this kind soul was even prepared to lead us to them. We made a pitstop at the village head’s home for a courtesy call since he was the owner of these trees that had grown on his land.

We drove deeper into the jungle until we finally had to stop and continue the journey on foot. As we got closer, I began to feel more optimistic that we’d find these incredible trees, which may just disappear from the face of the Earth soon.

Amazingly, no other villages in Miri has this species of durian. 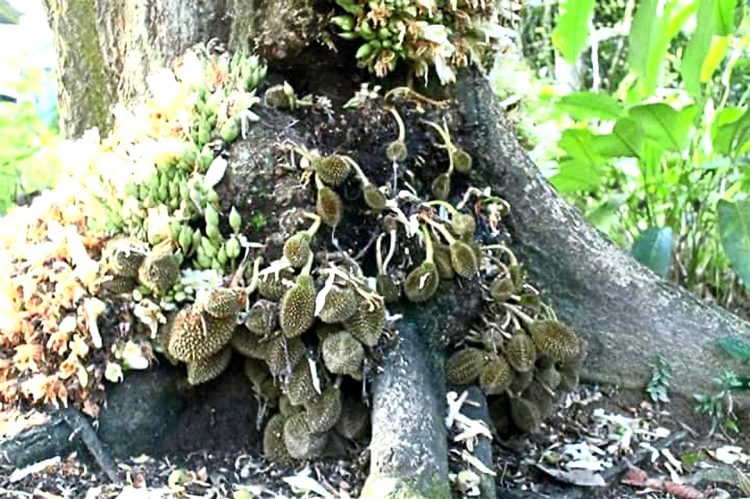 Kura kura durian grows at the base of its tree, very close to the ground. Photo: Cikgu Yus

According to a Borneo Post report, Kampung Selanyau JKKK deputy chairman Johnny Mungkil revealed, “visitors from Peninsular Malaysia and overseas come here to get a glimpse of the trees and fruit.”

Apparently, some of the trees are over 50 years old. The tree is unique because it flowers and bears fruit at the lower portion of the trunk. This feature draws visitors in droves to Kampung Selanyau. 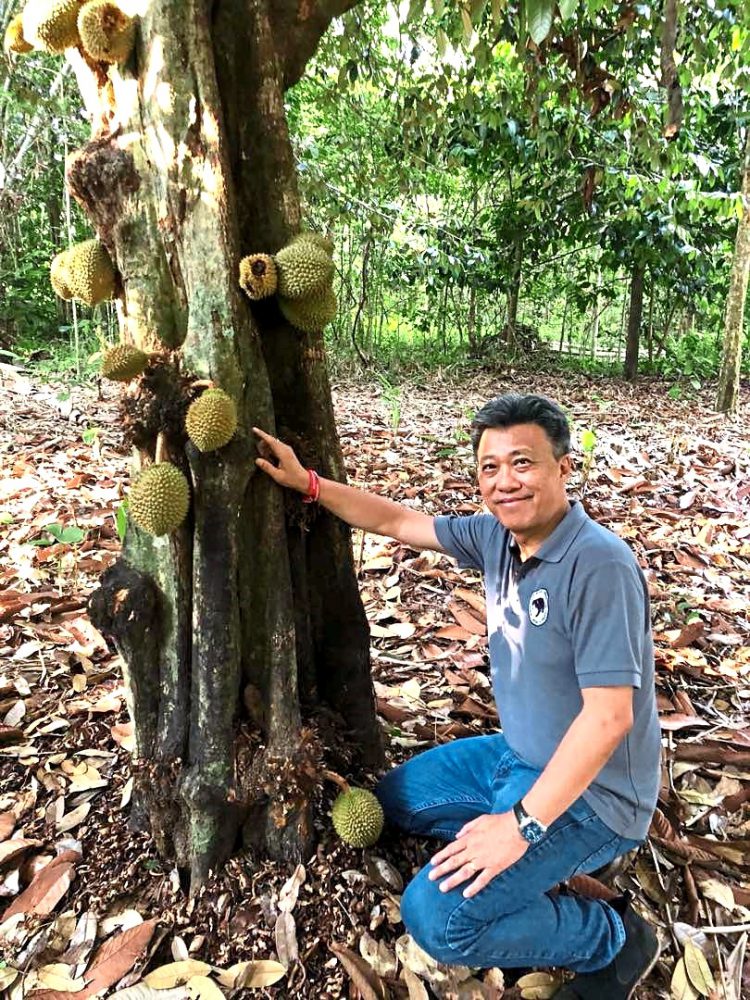 Thanks to Cikgu Yus, a teacher whose father owns a piece of land on which a few of these jungle trees stand, I finally saw what the kura kura durian trees looked like.

The trees were not cultivated – they just happened to grow on their land.

Unfortunately for me, by the time I saw them, the season was already almost over, and the fruits left hanging on the trees were still unripe. It was a classic case of so near, yet so far – I found these fruits but had no chance to taste them.

Cikgy Yus could sense my disappointment so, to cheer me up, she showed me some photographs of durians clustered like balls around the base of a tree.

One villager shared that this yellow-flesh durian isn’t as sweet as regular durian and is an acquired taste.

Durian expert Lindsay Gasik has a better description. She wrote: “… this durian has more in common, texture-wise, with a crunchy jackfruit than with durian. It’s brown-sugar sweet, almost like a chico sapote, and each rubbery sec of flesh peels away cleanly from the seed. And it has almost no aroma.”

Like me, she too had travelled to Borneo in search of the fabled fruit, narrating that “a few years ago, I rode a bus over 36 hours, slept on the floor without a mosquito net, contracted both intestinal parasites and some form of dengue, and got held hostage by a tribe upriver, just to find Durian Kura Kura.”

Eventually, she found them at a market in Limbang, a small town in Sarawak adjacent to Brunei.

“Finding durian kura kura in Limbang was annoyingly easy. It almost made me mad. It was just there, at the daily market, sold in a pile like every other random and equally rare fruit.

“Hey, it’s a special durian. So darn worth it because durian kura kura doesn’t taste like durian. It’s weird, and really unique, and finding it was one of the highlights of my durian life so far.” 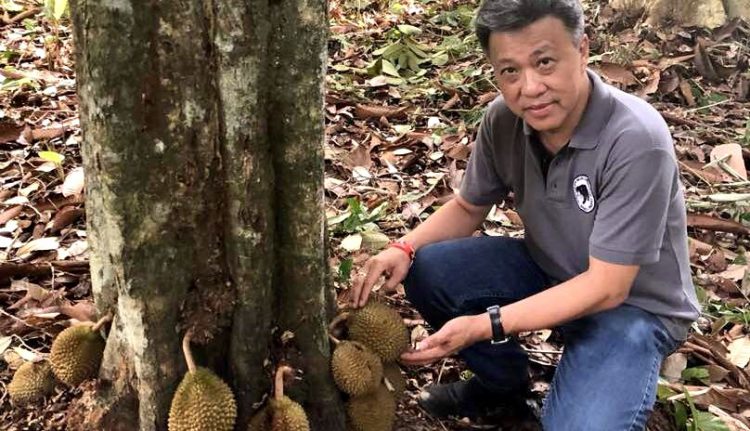 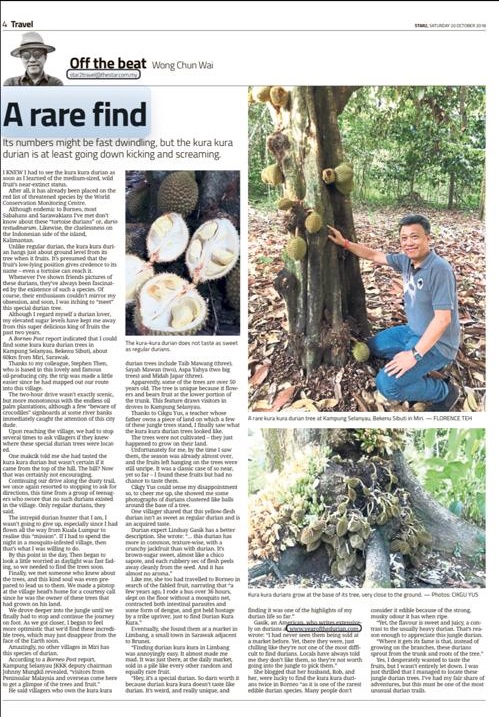 Gasik, an American, who writes extensively on durians at yearofthedurian.com wrote: “I had never seen them being sold at a market before. Yet, there they were, just chilling like they’re not one of the most difficult to find durians. Locals have always told me they don’t like them, so they’re not worth going into the jungle to pick them.”

She blogged that her husband, Rob, and her, were lucky to find the kura kura durians twice in Borneo “as it is one of the rarest edible durian species. Many people don’t consider it edible because of the strong, musky odour it has when ripe.

“Yet, the flavour is sweet and juicy, a contrast to the usually heavy durian. That’s reason enough to appreciate this jungle durian.

“Where it gets its fame is that, instead of growing on the branches, these durians sprout from the trunk and roots of the tree.”

Yes, I desperately wanted to taste the fruits, but I wasn’t entirely let down. I was just thrilled that I managed to locate these jungle durian trees. I’ve had my fair share of adventures, but this must be one of the most unusual durian trails.
The Star, 20 October 2018