A group of 44 holidaymakers who were brought by travel agency Apple Vacations posing in front of the eagle statue at Dataran Lang in Langkawi on Sunday.

PETALING JAYA: Travel agents must adapt to the new normal to capitalise on the fact that Malaysians are looking forward to travelling domestically during the recovery movement control order (MCO) period, say tourism industry players.

Among the agency’s plans to help the industry is the provision of a free integrated online platform, where travel agents can advertise without needing to pay for the services of third parties.

“We will also have online collaborations with companies to offer deals for travellers who visit multiple states within a defined period,” said Ammar, adding that Tourism Malaysia also planned to engage state-based radio stations and social media influencers to talk about the attractions of every state. 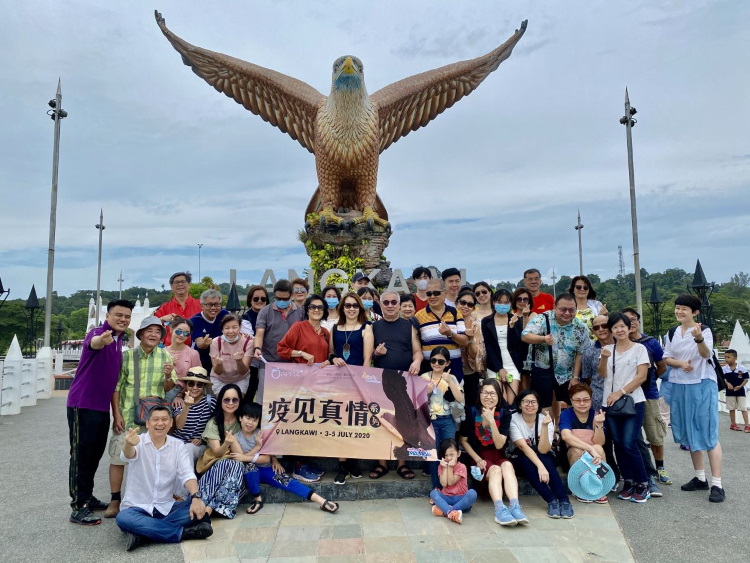 A group of 44 holidaymakers who were brought by travel agency Apple Vacations posing in front of the eagle statue at Dataran Lang in Langkawi on Sunday. They came for a three-day trip to the island. Apple Vacations group executive director Datuk Seri Lee San said two coaches were hired for the group to ensure social distancing is maintained.

“For example, someone from Johor can talk about the products from the state at a Kelantan radio station and vice versa to help promote inter-state tourism,” he said.

He said the Cuti-Cuti Malaysia campaign would be incorporated in all domestic campaigns and enhanced through integrated marketing campaigns nationwide.

“We encourage Malaysians to use #cuticutimalaysia to help our economy prosper again,” he added.

The Statistics Department’s indicators for Domestic Tourism for 2019 showed that domestic visitors increased by 8.1% to 239.1 million visitors in 2019 from the year before while spending rose to RM103.2bil, or up by 11.5% compared to 2018.

Among the guidelines are using a QR code for check-in, contactless payments, upgrading of systems and having fewer arrangements in the itinerary.

“We are pushing for packages with good rates and new experiences to accommodate the new norm.

“We also hope the government will provide incentives for domestic travel against the backdrop of the global recession,” said Tan, who foresees that moving forward, travellers will be more inclined to buy packages with travel agents because of the quality and safety assurance.

“With FIT, we will focus on special interest mini groups. Another important factor is to assure travellers on post-Covid-19 safety measures, which will determine whether they will travel with us,” he said.

He noted that Penang had the “complete package” as a destination as the island offered the experience of a city within a village, and had historical and heritage sites as well as eco-tourism attractions.

Selangor was highlighted as the most visited state by domestic visitors in 2019 which accounted for 33.6 million visitors, followed by Kuala Lumpur (22.6 million), Sabah (22.0 million), Perak (21.1 million) and Sarawak (19.8 million).

Hamzah said the biggest challenge for travel agents in domestic tourism was that travellers often opted to go on their own, which hindered them from having a more personalised travel experience.

Tourism Malaysia’s survey on domestic travel here after the introduction of the movement control order found that most travellers (88.4%) preferred to travel independently and out of that total, 98.8% of them bought their travel arrangements from booking sites.

Only 11.6% said they preferred to travel using tour packages.

“Destinations may look good in advertisements but some may not be ideal for the specific traveller, so travel agents can help them get what they need out of a vacation.

“Travel agents have better access to a variety of resources than the average traveller such as getting better amenities at hotels and cheaper tickets, as well as planning exclusive activities,” Hamzah said.

Apple Vacations group executive chairman Datuk Seri Lee San was optimistic about domestic tourism as he brought his first group of 44 travellers for a three-day trip to Langkawi, which ended yesterday.

“Although those who joined were worried at first, their concerns dissipated after checking in at the airport and our tours went smoothly.

“We were also told that we were the first group to visit one of the attractions in Langkawi as most of the other visitors came on their own,” Lee said, adding that safety was of utmost priority.

For this, Apple decided to hire two coaches for the group to enable ample social distancing.

“Our group members were also informed about our additional measures such as flexible cancellation policy, small group size, complimentary travel hygiene kit as well as our strict selection of accommodation, flights and facilities that adhered to hygiene SOP,” Lee said. 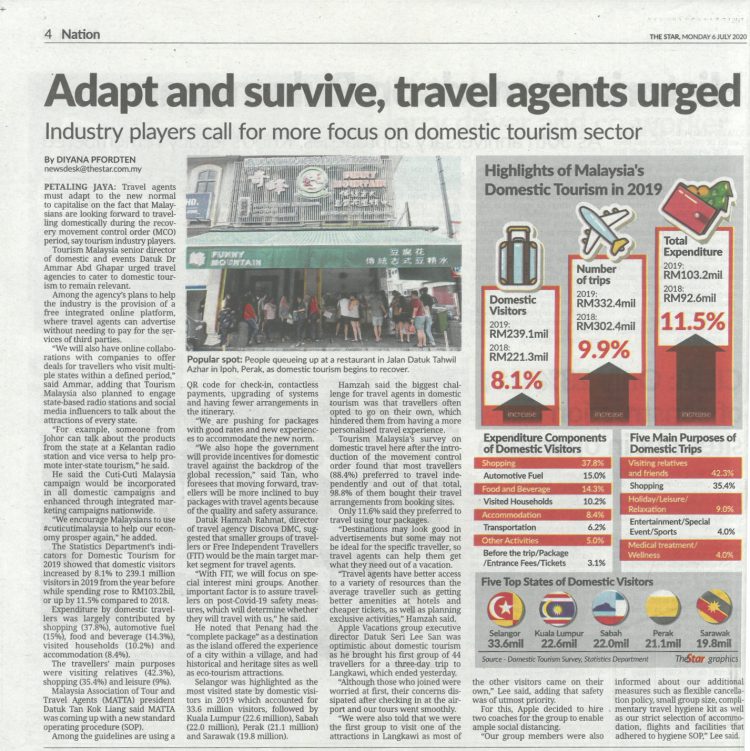