She said this is for the good of the country and her people. To be honest, the moment she said this, many tourism operators began to feel a chill running down their spines!

Not long ago,  our tourism minister announced to the media and on social media that any Malaysian intending to travel overseas or foreigner planning to visit this country can only do so earliest in June 2021. She said this is for the good of the country and her people. To be honest, the moment she said this, many tourism operators began to feel a chill running down their spines!

The thing is if international travels are banned, those in the tourist industry, including airline companies, will have to take the brunt, and hundreds of thousands employed in this sector will be out of work! Those in our business are still waiting patiently for the RM1 billion emergency assistance from the tourism ministry, and we have little idea where the money has gone! Our dear minister, can we look to you for our lifeline?

Between January 24 and March 17 well before the MCO, China was the first to seal its borders and this was soon followed by many other countries, marking the start of the war against the virus for the travel fraternity worldwide. Inbound travel operators, tour bus companies, hotels, souvenir shops, restaurants, private theme parks, etc. were the first to take the blows. Workers, tour guides and drivers were laid off and some companies simply shuttered their doors to stop the bleeding. The 3 to 6 month unemployment assistance provided by the government came as a relief, but what about the hefty debts those companies had on their shoulders?

Outbound travel agencies were even worse. Many canceled their spring peak season tours as companies were doing everything they could to minimize expenses, their staff drawing zero salaries to stay employed, as their shops were shuttered. Some were fortunate enough to reopen for business later, but others were forced to wind up or change lines. Most of the tour fees were stuck with the airline companies or advance payments, or used to pay staff salaries, bonuses and incentives early this year.

As they were unable to go on oversea trips, customers would invariably demand a refund. As if that’s not enough, foreign ground arrangement agencies were demanding unsettled arrears from November through January. What could we do? We could only sit down and wait. No way for us to escape the obligations and we couldn’t go after the virus for all this! Could we? Perhaps all we could do was to defer the payment for as long as possible.

Honestly, no one would like to see this happen to them, but we have to keep our companies which we have worked so hard over the years to build, afloat! Outbound tour operators should know very well their hard-earned reputation could be at stake if they do not handle things prudently. Thanks to continued support and understanding from our loyal customers, we at Apple Vacations are fortunate enough to sail past this crisis safely.

March 18 to May 12, the 55-day MCO period marked the second round in our battle against the dreadful virus. Some of our fellow industry players began to sell durians or farm produce online, or be food delivery riders and what not, with the hope they could feed themselves as well as their families out of sheer desperation.

My partner Koh and I were consistent in our position: while waiting for things to improve, we focused our attention on instilling positive energy into the organization and encouraging our staff to keep learning new things for self improvement. In the meantime, we were also concerned about the predicament of our overseas ground arrangement partners and offered them our best wishes. As a matter of fact, we ourselves could barely survive, yet we decided to settle the debts still owed to them in six installments in order to offer some slight momentary respite to their hardships.

However, as the unpredictable virus continued to wreak havoc, it was utterly necessary for the company to tighten its belt and reluctantly explore the salary cut option. Full-time employees had to take pay cuts between April and July. Fortunately, even under such a challenging zero-income environment, our staff were able to understand the importance of holding on to our very limited resources. In this round of battle, we have seen undivided loyalty of our staff.

From May 13, the country proceeded to the recovery MCO phase, which also marked the start of the third round of our battle. We continued to do our respective jobs dutifully and not to back down the least. During this period, all the 165 employees of Apple Vacations were divided into two work shifts, each working for 11 days a month, as we sacrificed for one another during this trying period.

Our marketing and promotions department has enlisted some of the colleagues with a passion for change as we consulted their views in program planning and sales in charting new social media solutions. Among them: Go Apple Cuti-Cuti domestic travels. Collectively they constitute a powerful and indispensable positive energy that has seen overwhelming response and support from the public. I’m deeply indebted to these people who have displayed their undying spirit!

In July, we saw the return of the long-missed daybreak. I stepped into the aircraft cabin once again with 42 members of the tour group for the short flight to Langkawi. This was later followed by the Mulu trip. I remember the heartwarming moment when a little girl hugged me so tightly at the airport like a long lost friend. Wherever we went, we saw the smiling faces of people coming into our sight: the pilot, cabin crew, ground arrangement staff, tour guides, boatmen, hotel gardeners as well as attendants at the restaurants and souvenir joints. Together we welcome this moment of glorious sunlight that we have been waiting for so long.

I shared my feelings at the dinners in Langkawi and Mulu hosted by Pei Pei: “This is our first step and we are the first group to make this move! It is not because you have stayed home for so long, but because you have shown your practical support for me Lee San, and Apple Vacations, lighting the spark of hope for all other travel operators in the country.” I held back my tears as I  went on: “No matter how tough it’s going to be, I will keep the company going even if it means I have to sell my car and house!

My partner Koh and I have decided that we will keep the jobs of our 165 employees at all costs. We are family, and will go through the thick and thin together!”

But things didn’t look so well into the month of August, as countries like Japan, South Korea and Australia began to see a second or third wave of COVID-19 infections. Borders remained closed and the green lane initiative died a premature death. Based on what our tourism minister has said, are we going to wait for another ten more months?

It looks like we are about to enter the fourth round of the battle. I personally believe I can weather the storm quite well, but the company has been in a state of zero income for almost eight months now, and we have 165 people on the payroll! I have no choice but to affirmatively take up this whole burden! The thing is: for how long more can we go on this way? Judging from the situation today, all companies will have to tighten their belts and streamline their bloated operations. The real problem is just about to knock at the door!

On August 11, sailing along the Kinabatangan River in Sandakan, I shared my views with 22 tour group members on the coronavirus situation, but found myself choking back tears before long, totally speechless. Indeed, the virus has battered the world on an unprecedented scale, far too deep and for too long! Out of no choice we had to put 36 of our staff on unpaid leave. I was well aware if the employees lost their jobs, their families would be starving, too. That said, how could we expect the paltry RM600 monthly incomes for the following six months to be sufficient to keep their families adequately fed? I felt a deep pang of guilt for failing to honor the pledge I once made to them!

We still have not claimed victory in the battle against the virus, and because of this I need to muster all my strength and steadfastly lead my troops along. Apple TV, Go Apple Cuti-Cuti and many other initiatives must go on, and we cannot afford to let up in our effort even for a brief moment!

August 29, the PM expectedly announced the extension of RMCO to the end of the year. So, the tourism ministry’s prediction that Malaysians can only travel overseas after next June is not a joke at all!
The fifth round of battle, no matter how horrendous it may be, is nothing we can dodge. And we’re ready for it!

No matter how many more of our staff may be put on UPL in the months to come, or perhaps we are eventually left with only a handful of fighters in our army, we swear we’ll fight til the war is won!

We will usher in a brand new morn when darkness wanes and this whole thing is behind us! Everything will be OK for all of us, and for Apple Vacations!

P/S: It’s towards the end of August before the month of September unfurls. Will you treat us a little more gently from this moment on, please? 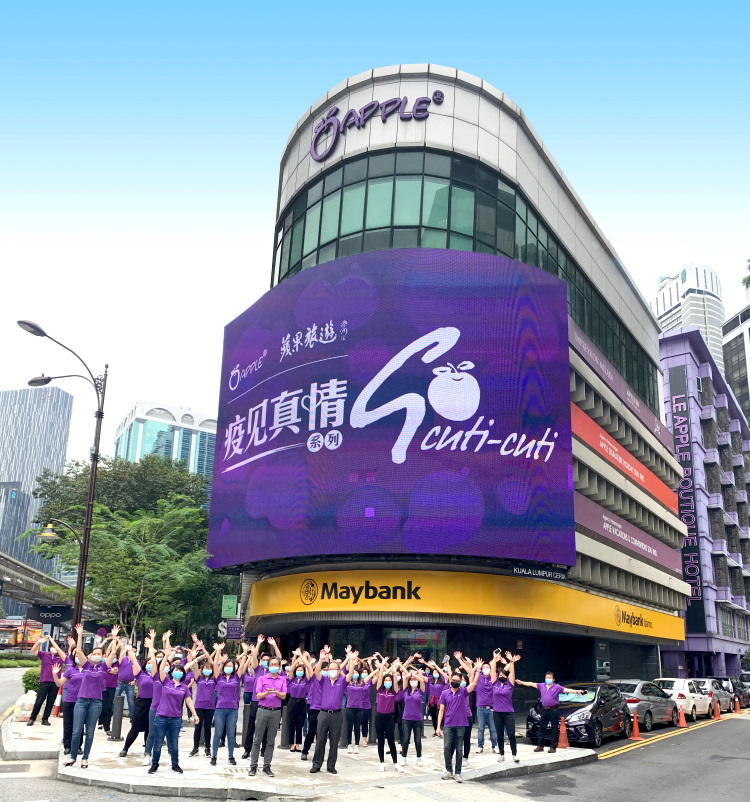 Even with only one soldier;
Fight to the end!

Be wary of Pick-Pockets